It has been three days since the What Would You Do With $25,000? video was published and I’ve only just seen it on my Facebook homepage.  As the days roll on, I expect that more people will share the link.  The clip appeared on a group page that I belong to for alumni/ae of the IS Manila international school.  I was a student at IS Manila when my father worked at the Canadian embassy in Manila.

I’ve heard about the movie Walter Mitty and I am a fan of Ben Stiller.  It’s a movie that’s on my radar even though I don’t go to films much these days.  Even if I hadn’t heard about the film, after hearing that the movie studio let promo money be used to help typhoon Haiyan victims in the Philippines, with minimal references to their film, I’ve noticed it even more. 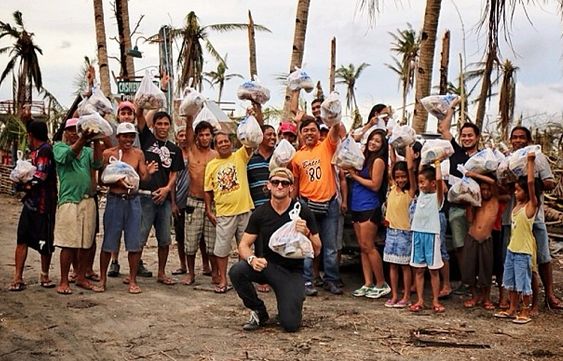 Casey Neistat’s project presents an an interesting idea – diverting funds from projects such as film or product advertising to humanitarian efforts.  He didn’t just share a film about his visit to Tacloban.  He used the funds ear marked to promote Ben Stiller’s film to buy 10,000 meals, tools for 35 villages and basic medical supplies for various organizations.

It will take months and years to fix the damage that Typhoon Haiyan left in its wake.  Many of the problems people in need are facing in BC are also ongoing and there are programmes and projects that aim to support them throughout the year.  Often British Columbians know little to nothing about the work that they do.  Wouldn’t it be nice to divert funds, as Neistat did, into goods and services that can help people in need?  As Neistat has done in his film, these efforts could be documented in a way that shows the reality of what is going on and how these efforts effected change.

Journalists and researchers quibble about how the child poverty rate is measured and whether it is  high or low in British Columbia compared to previous years.  What we do know for certain is that the child poverty rate in BC is the highest in Canada.  Meanwhile the poverty rate amongst seniors in Canada has risen by 2%.  It’s not hard to do the math about how that reality plays out for families and individuals as they live in costly urban centers while a parent/parents seek to find or hold on to employment.  We also know that single, unemployed parents are most likely to struggle with poverty challenges while raising their children.  Often that single parent is a woman.

Neistat’s YouTube clip will become popular and might even “go viral”.  As we watch it let’s ask ourselves “how could we do something like this in our own communities?”.  If not by diverting ad money then in some other way.  Consider how local music producer Adam Hurstfield and musician Elise Estrada recently released the song “All It Takes Is a Moment” to raise aid money for the Philippines.  Whether it’s re-purposing a budget in different ways or sharing our times and talent, the potential to try new approaches is endless while the need is great.

What are your thoughts about ways that we can support local organizations and citizens in need? You can comment about this posting using the comment function below or on the BCFamily.ca Facebook page. Your contribution matters so don’t be shy!

Casey Neistat wrote about what he bought on his Facebook page.