The second free entry to the PNE this summer encouraged us to brave the crowds and head down to Hastings Street with our preschooler twins.  They had never been so this was an adventure for them.

After we went through the entry gate we came upon a small Lego hut with five work areas full of Lego. At our house we mostly have the larger style Lego – though we bought two boxes of Lego friends and opened them after visiting the PNE. Our daughter’s experience has been with gender neutral Lego.  Ultimately she ended up at the pink table where girls were making good use of the supply of Friends Lego pieces, making creative gardens and rooms. It was interesting to see how they combined all the parts, though the process didn’t seem as open ended as using more abstract pieces of Lego. 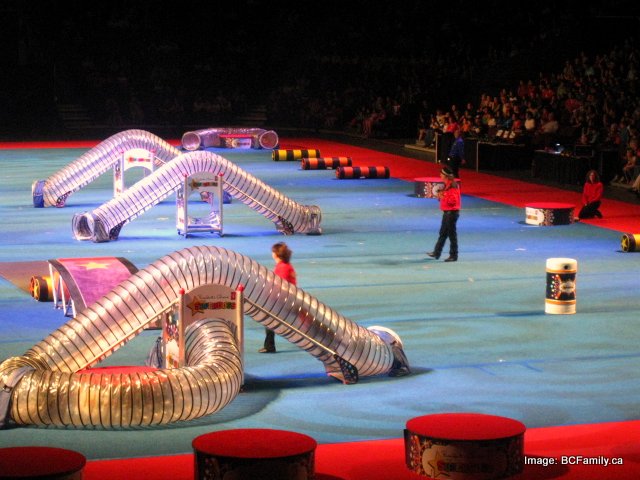 We arrived 20 minutes before the Super Dogs show started and overheard a mum saying that they should go and get some seats.    It turns out there would have been enough seats to choose from if we’d arrived later; however, it was nice to have a good sight line of the show.  The show is high energy and it’s interesting to watch the dogs run and jump.  My nieces enjoyed seeing the show a few years back and my four year olds also enjoyed it.  It was interesting to hear mention of the breed names as each breed has its own unique characteristics.  At the end of the show we went down to the floor to have a closer look at the dogs.

We celebrate the decade that brought us the mullet and acid wash jeans. Grab your fanny pack and leg warmers and join in the fun! Groove to the music of your favourite 80s icons: Madonna, Wham!, Cyndi Lauper and Michael Jackson. It’s- like, totally radical! (PNE Website)

For the record, as a student I didn’t wear any of those fashion items but I did listen to the music. As we walked down by the food concessions after watching Super Dogs, we passed the end of the 80s Forever dance show.  It was interesting to see how young adults dressed up to represent pop culture and music from the 80s. Think Billy Idol meets Boy George with a dash of early Duran Duran dressed in florescent colours and wild fabrics.  Yikes.  I did have friends who dressed like this for parties and concerts and another who channeled Billy Idol 24/7.  Otherwise I’d hate to think that this is how teens/young adults from the 80s are remembered!  Still the show is well choreographed and is worth catching.

We purchased some grilled cheese sandwiches from a concession for a quick and easy lunch and ate at picnic tables on the north end of the Sanctuary park.  As we ate I looked at a nearby family and mentally gave them full props for bringing their lunch.  If you’re looking for a tasty lunch, check out Henry’s Chicken (located by the Agrodome). It is slow roasted over hot coals and is coated with their secret sauce.  If we hadn’t had chicken the night before for dinner, we would have stopped by their concession. 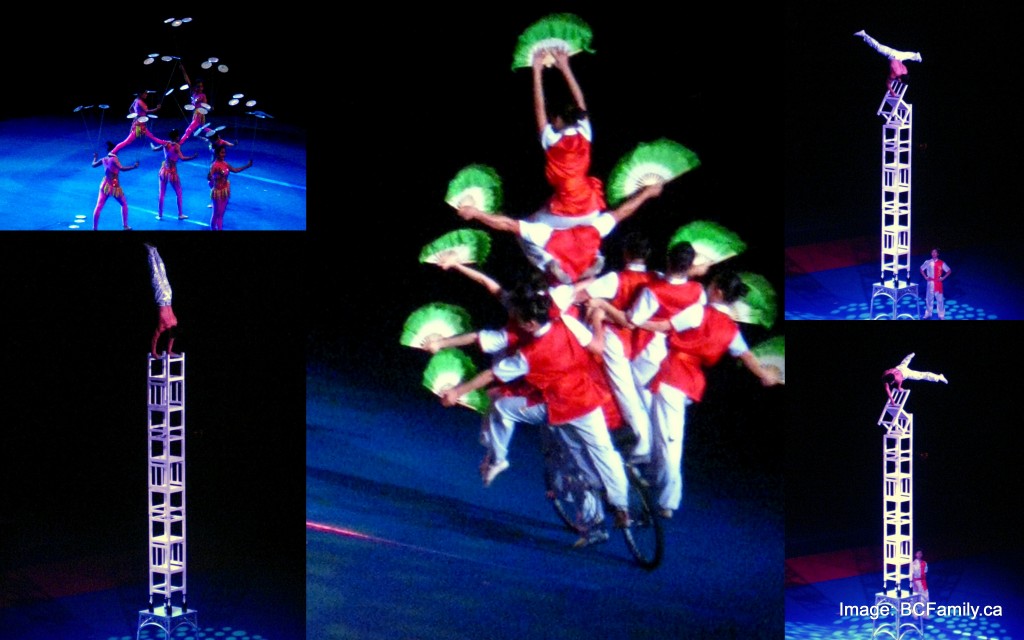 After a quick stop at a mini doughnut stand, we arrived at this show half an hour early. By that time all of the seats in the lower level were gone. We managed to find four seats at the lost level of the upper tier.  If you want a good site line for the show, keep this arrival time tip in mind.

The show was very enjoyable and the acrobats had impressive talents.  Since we don’t have the opportunity to watch shows too often as a family, seeing two shows in one day was a treat.

After the acrobatic show we stopped by the Agrodome to see an equestrian event.  It was the perfect opportunity for our children to see beautiful horses perform. We stayed for awhile and then checked out the barn animals and agricultural display next door.  The animals were beautiful and our children enjoyed having the opportunity to see a wide variety of animals and pet them too.  We also caught a milking demonstration which was educational for them.  I didn’t know that dairy cows are milked so often in one day. 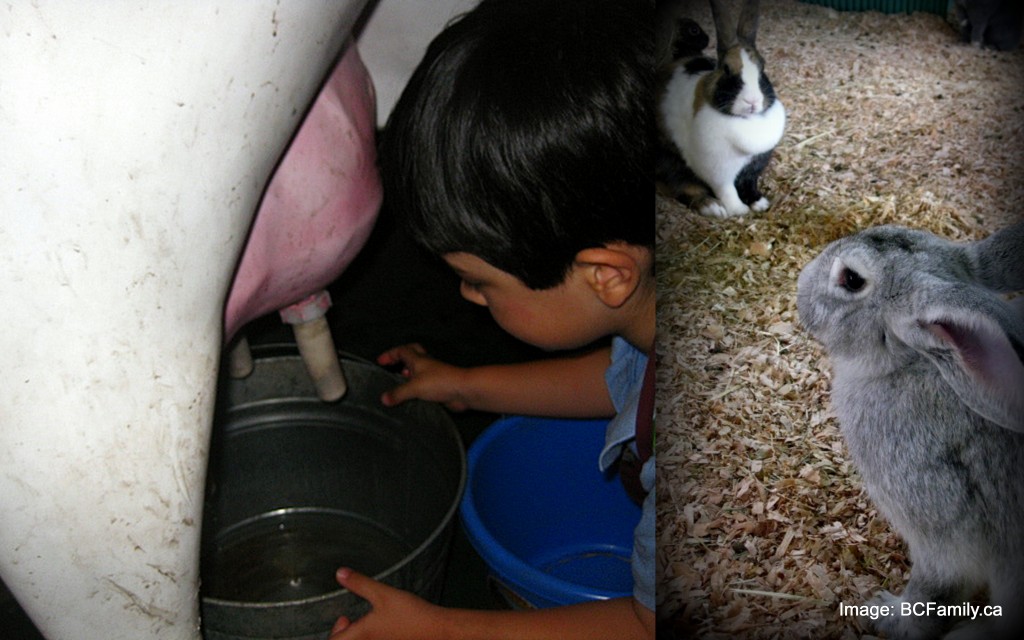 Our children enjoyed going around the make-believe farm. At first they had to get used to the idea that none of the items were real. My son took a watering can and marched off in search of water for the fake seeds he’d planted.  As they moved through the displays they made connections about where food and products come from.  A highlight for them was the opportunity to ride on child-size tractors that they could pedal about.

I learned something I didn’t know before.  A honey bee will only produce one teaspoon of honey on one lifetime.  Since I read this information at the PNE I’ve been careful to not waste even a speck of honey!

Just before we left we went back to the trough of sinks to scrub our hands well. 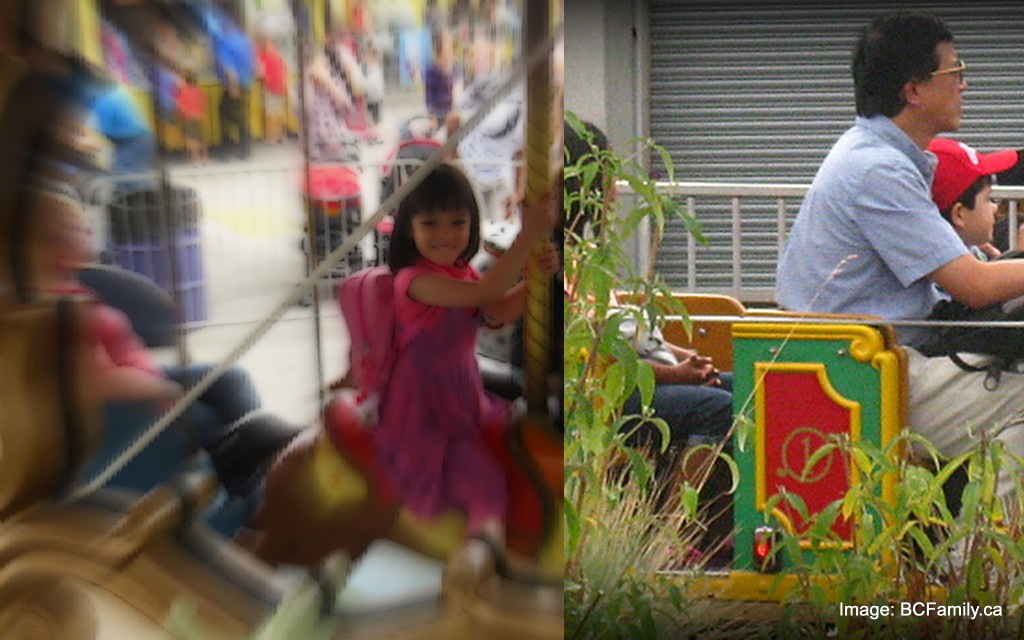 Since we wanted to stick to a budget for the day (part of our daily ritual), each of our children could choose one ride. One twin chose the merry-go-round and the other went on the train ride. For these rides one parent can accompany the child for free.  My daughter had never been on a merry-go-round before and was thrilled. 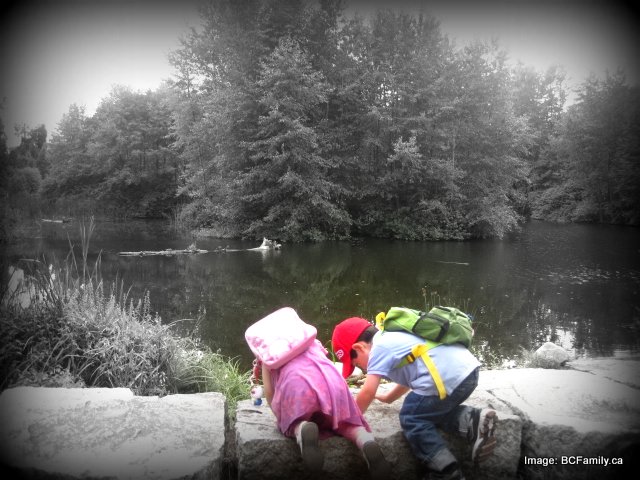 Following our brief trip to Playland, we visited the Sanctuary – a wildlife habitat next to the PNE fair.  It is surprising to see such a lush setting in a built up area of East Vancouver.  We arrived a little bit too late to take part in the Learn to Fish event but enjoyed taking in the beauty of the setting.

We didn’t visit this exhibit as we didn’t want to wait in the  modest line up. It costs $3 per person, with age 13 and under going in free.

If you have younger children consider using the PNE calendar and planning your visit around the events. (Calendar for Sunday and Monday.)  There are other areas and events that we didn’t check out including the community performance stage and the nightly concert. Since the crowds are pretty substantial at the PNE, it’s slow going moving around with young children. You’ve either got them in a stroller or you are always holding their hand as you move through the crowd.  After the Super Dog show a dad and his five year old son got separated from each other.

There is a fun selection of performers at the PNE and I felt envious to see that Great Big Sea performed a few nights prior.  Friends from the Atlantic provinces tell me they’re fabulous in concert.  Maybe next year?

You can comment about this posting using the comment function below. Your contribution matters so don’t be shy!

Key information about the PNE

Hidden gems inside the Sanctuary at Hastings Park.

Staycation (Day 4): The Fair at the PNE