On a typical morning in the mid 1970s, my father, brother and I took time out of our day to go to a medical appointment. As we were traveling down a long stretch of road just outside of Alymer, Quebec (now called Gatineau), my father decided to pass a car on the two lane road. As he started to execute the pass I had a feeling that I should lie down. I now believe that that feeling was in fact some kind of divine prodding. Moments later a snow plow made a right hand turn around a blind corner and crashed into us, crushing the long nose of the car. Thankfully since I was lying down, I slid into the back of the bucket seat and onto the floor. If I had not felt a prompting to lie down, I would not be sitting here relaying this story today. At the time our car had a standard setup for seat belts. The bucket seat in front had seat belts and no headrests. The back seat did not have seat belts. 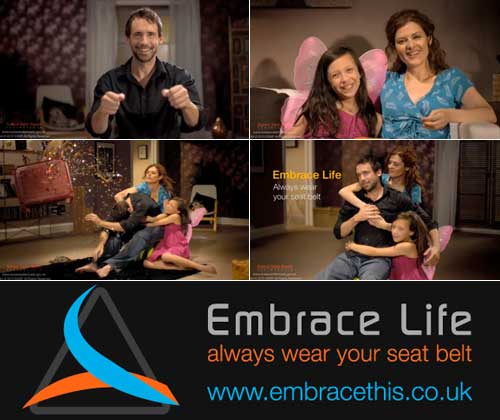 Nowadays we know much more about what makes a car safe for both children and all passengers in the car. Children sit in infant seats, car seats and boosters until they are well into their elementary school years and children appreciate the need to wear seat belts from an early age. The use of safety devices and seat belts has played a significant role in the reduction of injuries in cars. I know young children who have become quite distressed if the car moves before their seat belts have been secured. Sadly not all adults feel the same. The tragic death of Princess Diana is a shocking example of what can happen during a crash when seat belts are not in place.

The Embrace Life seat belt campaign coming out of the United Kingdom illustrates in a moving and memorable fashion why wearing a seat belt truly matters.