We weren’t taking up space in the aisle or getting in anybody’s way, and my 20 month old twins weren’t screaming yet.  Their meltdown usually happens when we reach the cashier and they realize it’s taken way to long to choose groceries. So why were people getting irritated?  This is what I was wondering as I went around my local Superstore with my twins today.  There they were sitting in the cart, shaking and handling various grocery products that I passed their way. In fact, I think it could be argued that they were very patient as their mother said, yet again, “oops we have to go back across the store. I forgot something”.  To be fair I did encounter people who would advise me if I dropped something from my cart (read one of the twins chucked something overboard).  Or someone would pick up an item that fell from the cart.  More disappointing, though, was that I encountered a number of people who seemed to be irritated by our presence.  As you would expect with bad drivers on the road, they rushed to pass us, sighing as they did so.  In one case as we turned the corner at the end of an aisle, we encountered a woman in her 60s who was pushing her cart our way. She clearly kept her cart going, forcing me to back our heavy, almost overloaded cart backwards to let her pass.  (In her position I would have let the mum with twins and a cart full of groceries have the right of way.)  People behind her hitched a ride to pass us, and then out of the corner of my eye I saw a man to my right about to make a break for it. This is when I announced to the twins “now it’s our turn!”.

Maybe I should have taken a hint about how my excursion would turn out when I went to get the shopping cart after we arrived in the parking lot.  Of the many carts that were there, there were only two that had seatbelts.  The cart with the best functioning seatbelts was being returned by a female shopper.  Looney visibly in hand, I asked her if I could give her my dollar so that she wouldn’t have to return the cart.  My twins were in the car and I needed to get back pronto.  “I don’t have money!”, she replied as she fumbled with the cart.  Did she think I was pan handling?  Oh probably. I wonder how she made sense of the situation when I immediately plunked my dollar into the other cart and sped off.

For the love of communitarian attitudes, could we not learn to cohabit better in public spaces?  In recent days as I have read about how people in Japan are working together in their communities to survive the earthquake and tsunami in the Sendai region, I wonder how we could get along in the face of a disaster in British Columbia.  I spent nine years in total living in Japan both as a student and expatriate working for an international company.  I have always said that there’s nowhere I’d rather be than in Japan should a disaster strike.  A Canadian from BC echoed the same sentiments recently when he described current conditions in Japan.  In his opinion “Metro Vancouver is dangerously unprepared for a major quake, not only in its emergency preparedness measures but in its lack of social cohesion required to band together and carry on after a natural disaster.”  If we can’t show friendliness, empathy and consideration towards our fellow residents during times of peace and comfortable living is there any hope for us in the event that a large disaster strikes (such as an earthquake caused by the Cascadian fault line.)?  It’s time to step it up a notch.  We need to start saying “hello” to the neighbour who moved in next door six years ago.  We need to learn how to engage in pleasant chit chat with someone we meet in a store or at a bus stop.

So the next time you arrive at tea time while visiting a church for the first time and nobody wants to leave their huddled groups to say “hello”, shake things up a bit…. Oops. Wait.  I’m moving on to another time and story.  But we did wonder why the priest didn’t direct the young homeless man to the teatime for tea and doughnuts when he asked for food.  No really.  I should stop here.  You get the picture.  But I do want to say “thank you” to the manager at the store who came to help me bag my groceries.  As you may know, at Superstore you bag your own groceries.  I like to think she helped because she could see I needed help, not because my crying duo were causing a scene.  Truly I believe this is the case.  For every grumpy fellow community member you can always find at least one other cheerful alternative! 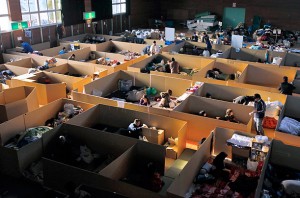