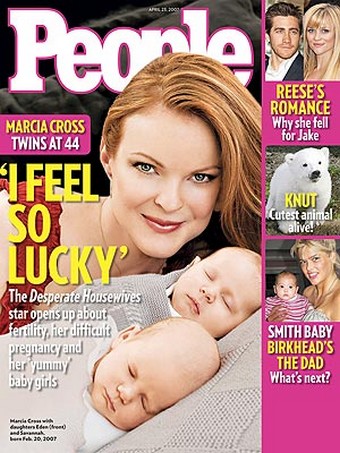 The collective vitriol against women in their later years of fertility for their hope in being able to conceive is what’s getting old, while our happy optimism is keeping us 40-somethings young – and dare I say, wrinkle-free. Melanie Notkin, SavvyAuntie.com

This month you won’t have to look too far before you will come across an article about women who delay getting pregnant.  Here’s how the story line will go.  Women are delaying pregnancy. They are focussing on their academic endeavours and careers, thinking that they will still be able to become pregnant well into their 40s.  The examples set by famous Hollywood personalities who are having babies in their 40s gives the wrong message to women today.  Women should understand that many of these older mums are using frozen or donated eggs and embryos in order to achieve a pregnancy.  The procedures they use are invasive, expensive and potentially life threatening.

The question that is not being adressed by journalists focuses on the most important point.  Are women delaying pregnancy?  Certainly many women are having babies when they are older but is this a deliberate choice?  Should we ask the opinion of journalists who haven’t passed age 30 and can merely speculate about how they will feel about their fertility ten years down the track?  Will these women know  how their lives will turn out by the time they reach 35 or 40?  Should we focus on media personalities such as Celine Dion who finished a five year contract before becoming pregnant with twins after five failed IVF attempts?  Isn’t it a better idea to ask average women who are over 35 and 40?  What have their experiences been?  Did they really put schooling and career before having a child?  If they didn’t, do we care about their reasons for becoming a mother after 35?  Or do we just want to think that women believe they can have it all, no matter the cost?

If you are in your 20s and wonder why your friends and colleagues did not start their families until age 35 and older, here are  few pointers that you will want to consider.

* Many women do not date, to any significant degree, between ages 17 and 24. Amongst their schoolmates from high school, the story might be quite different. Many of their friends might be married by their late 20s. Most of these married friends will have started a family by the time they are 30. In Great Britain, for example, the average age for a woman to start a family is at 29 – the age of Catherine, Duchess of Cambridge. However this story is not every woman’s story.  Many women do not meet their life partner until their mid or late 20s, or many years later.   Many women are choosing to get married after age 30.

* When a woman is living on a modest income in recessionary times – think 2011 or the early 1990s for the Generation X – volunteering is a great way to get out in the community, give back, meet people and have a bit of fun. It is not a great way to meet members of the opposite sex. (If that is something you would like to do.)  Most of the volunteers women will encounter will be female.

* In some careers, such as teaching younger students, almost 100% of the staff members are female.  This is not an ideal situation for personal networking purposes.

* Some women decide to move away from their home or university town after finishing their post-secondary training, undergraduate or graduate degree.  Some women try to overcome the poor job selection in their home town or country and move to another country or continent.  This means that they will need to take the time to establish a new social network.  This takes time. If she is on a limited time track to start a family, this relocation will delay her progress.

* When a woman is in her mid to late 20s, starting a family may not be a priority as other pressing issues demand her attention.  Paying off student loans, being fiscally responsible, starting a new job and career and building a social circle will be first and foremost in her mind.

* If she is a minority in a foreign country, she can expect that her fellow country men will not be particularly interested in her.   She can expect to meet many men who are tired of the women back home and want to meet the more enticing local options.

* When she is working overseas the foreign men she meets just might have a girlfriend or even wife tucked away in their home country.  Think Naval officer who isn’t such a gentleman, with a woman in very port, or Italian professional who is living too much of La Dolce Vita.  If she does not want to be flavour of the moment, she should proceed with caution.  Marriage and babies will not be following these types of encounters.  Numerous relationships over the course of months and years will be on the menu.

* As she tries to build a career, that will support her financially and allow her to do more than cover her basic expenses, she might have to work hard – maybe even work long hours.  The time that she spends on her work related efforts will take away from socializing and meeting a potential spouse.

* If she moves more than once during her 20s and 30s, she will find that after each move she will face personal disruptions to her social life as she put down roots again. (This point bears repeating.)

* Taking time off to complete graduate school or further professional training can work in her favour, on the personal front, if she meets a future spouse.  If she doesn’t, or if she makes choices in romantic partners that do not turn out well, her years spent in Academe will not help her along her path to becoming married and a mother.

* Every year that she gets older, more younger women join the single women scene and she is ranked by an increasingly younger standard.  Men her age might start to focus more on younger women.  Some might even make jokes about the fertility of older women and their biological clocks. If she decides to date a man even one or two years younger, cougar jokes start to circulate when she is still in her early 30s.

* If she is 35 or older, she might find her doctor is practically jumping around his office telling her that her fertility dwindles after 35 and to not believe that Hollywood actors are using their own eggs.  She politely tells her doctor that she is not married  – indeed she has only just started dating someone and cannot speed up her motherhood journey.

* When she does meet the right person and gets married, children won’t necessarily come along right away.  It might be years before she and her partner see a positive sign. Meanwhile she can be certain that she will hear every story going about X or Y who decided to become pregnant and, oh look, two months later she was with child.

* Once she is married and thinking about starting a family others will assume she will never have a child.  Some might start to suggest that she adopts.  It isn’t that she is completely against adoption, but she still wants to see if she can have a child.

* Is she expecting to have it all now that she is over 35 and would like to start a family? Is there evidence that she deliberately delayed getting married and starting a family? She knows what the answer is.  Unfortunately her side of the story is rarely told.

*When she does become pregnant in her late 30s or early 40s her colleague says “Gee you left it a bit late to have children, hey?”

What not to say to a single woman who have to wait to become a mom.

The Parent Project: Podcast about what can happen when older women attempt to have a child

Fertility Success Story of a PANK (Professional Auntie, No Kids)

SchadenForty SavvyAuntie Melanie Notkin tells her side of the story.

Worried About Being an Older Mum?  Don’t, Says Experts