As the days passed I started to wonder how radiation fallout from the nuclear plants would affect people on the west coast – specifically children?  What kind of plan di the BC and Canadian government officials have?  I suspected they probably wouldn’t tell me but I decided to ask the offices of government representatives. I also reached out to the mainstream media to ask this question.  Within a day I was interviewed for a local and national programme.  I felt the interview went well and that I had a good rapport with the interviewer, who is an experienced journalist.

Trying to decipher the scientists’ analysis of the situation at the Fukushima Daiichi plant was challenging.  On the one hand a Canadian science consultant explained the events by using drinking straws, reassuring us that there were no concerns. Nothing could possibly happen that would have a serious impact on the west coast and Canada.  Meanwhile an MIT expert said that there has never been a situation involving so many old reactors grouped together that were not built to the modern, recommended safety standards.  Their assessment of the outlook seemed less certain.  As for the Canadian Government, I understood that Canada is the second largest exporter of uranium. Could their comments ever suggest that there are concerns about the safety of nuclear plants? 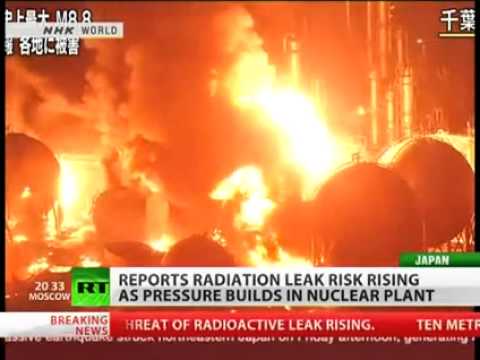 Over the years I have read a number of endocrinology research papers and can hold my own in a medical conversation about topics that also touch on hypothyroidism.  Due to personal health reasons, I am the last person who should be taking potassium iodide.  If I did take it, I would need to be closely supervised by a specialist.   Additionally people in my age group are the least susceptible to disease post nuclear fallout.  (My explanation in case anyone thinks I was chomping at the bit to get hold of this product and self-medicate.)

As my children were two at the time of the Fukushima meltdown, I was aware that the smaller bodies of children make them more susceptible to disease caused by radiation fallout.  Here is an explanation why children are more vulnerable, provided by the US Environmental Protection Agency:

Children are growing more rapidly, there are more cells dividing and a greater opportunity for radiation to disrupt the process. EPA’s radiation protection standards take into account the differences in the sensitivity due to age and gender.  Fetuses are also highly sensitive to radiation. The resulting effects depend on which systems are developing at the time of exposure.

The first population that would need treatment if radiation levels increased would be children.  Thinking back to the hit-and-miss services available for H1N1 vaccine, I wanted to know if the BC and Canadian Governments had a plan regarding a potential roll-out of treatment for the most vulnerable members of the population.  I was also thinking about the needs of people in more remote communities such as Haida Gwaii or Burns Lake – not just the people living in Metro Vancouver.  How efficient would delivery of potassium iodide be in rural locations?

In Spring, 2011 and for some time afterwards I encountered these types of reactions following my interview:

*   “You should worry about the poor people of Japan, not people in the Pacific Northwest.”

–  I was probably more impacted, emotionally, by this event than the average person as I’ve spent a decade living, studying and working in Japan.  They chose the wrong person to assess as being unempathetic and self-interested.

*  “The people in Japan need the world’s supply of potassium iodide.”

–  There was no indication that there was a worldwide shortage.

– There were differing  opinions being offered by senior science experts.

* “Weren’t you on the news awhile back?” [Accompanied by cheeky grin.]

– Early attempts to flesh out the conversation were met with distracted attention.  Perhaps I should have shared a 140 character tweet in response, smart phone to smart phone. Eventually I chose to not respond.

–  We now know that the situation at the plants was very close to being much more serious.  November, 2011:  “The stricken Fukushima Daiichi nuclear power plant came a lot closer to a full “China Syndrome” meltdown than previous company analyses had indicated, though there is no danger of further damage now, plant operator Tokyo Electric Power Co. (TEPCO) said Wednesday.” (Excerpt from Washington Post story, still available for free on the New York Post website.)

The most galling assessment was one that came by way of the television news story that featured my interview.  While I was coherent, clear and – as I like to say to combat gender stereotypes – being “very male” about my concerns, somebody edited the voice over to say that I was “scared”.  How could the journalist involved have concluded that I was “scared?!  “Concerned” would have been a more appropriate word.

Apparently it’s unusual for an average citizen to ask a question about the emergency response planning process. Years of earthquake preparedness training, and Standard First Aid and Light Urban Search and Rescue courses must have made me more vigilant.

In the story of the Fukushima Daiichi accident, the earthquake and the tsunami there was a valuable learning opportunity to cover stories that looked at aspects of preparedness and survival both in Fukushima and in the larger nearby metropolis of Tokyo and Yokohama.  After all – we do live in an active earthquake zone here in British Columbia and we are much less prepared than they are in Japan.  I heard, and continue to hear, many noteworthy stories from friends, journalists and former colleagues  that aren’t discussed by international journalists.

In January 2013, a paper was published with findings indicating that there was a 16 – 28% increase in incidences of hypothyrodism amongst babies born on the west coast of North America following events in Fukushima. The paper does not include data from British Columbia, but follows results in Washington State and Alaska.  The very smallest of children – babies in utero  –  appear to have been affected by the lower levels of radiation that came to our shores from the Fukushima Daiichi plant.

When I read the research findings to a family member over the phone, the first thing he said was “so you were right all along.”

What matters is that we should always feel empowered to question experts – especially if one group of experts isn’t agreeing with the other.  We should seek out primary documents when assessing news stories. (I have read the full research paper online – as can anyone else who is interested.)

We should feel confident to contact government officials to ask for more information. In a recent interview with George Stroumboulopoulos, CBC journalist Carol Off explained that in the United States citizens are naturally dubious of Governments and feel that as taxpayers they have the right to be fully informed.  Whereas in Canada, Off explained, we assume that if we don’t hear information from government officials it’s because we don’t have the right to know.

We shouldn’t be ridiculed or silenced if we exercise our right as a citizen to ask questions and challenge official statements, or a lack of information.

We have to accept that if we put our concern, question or story in the media spotlight, we don’t control over the final editing and presentation that is shared. My family member (as per my recent phone call), warned me about this eventuality before the interview.  He was also right all along.

Is this the final word on the effect of low level I-131 exposure on children? Debates will be inevitable.  One commentator had this to say about the news release regarding the study:

What the abstract ended in saying was further study is needed to establish a relationship between the fallout and an increase in hypothyroidism. Don’t jump to conclusions until further study has been done! You are taking the abstract out of context!

A full copy of the Radiation and Public Health Project report (not just the abstract) is available online. (See Related below.)  Here are some statements and findings from the report:

Possible explanations for this finding should be considered.  Prior research has shown that certain demographic groups are at greater risk for CH, including female births, Hispanics, Asians, and births to older mothers.  However, it is highly likely that distribution in gender, race/ethnicity, or maternal age changed little from 2010 to 2011.

Knowing the number of live births and calculating CH rates could change the results, but the official estimate that live births will decline just 1 percent from 2010 to 2011  makes this unlikely to explain the difference between the two groups of states.

Numerous reports have identified elevated disease risk from low radiation doses previously believed to be non-hazardous, or at least not able to be calculated using standard  research methods.The consensus from results of these and other studies was that risks to health of radiation exposure follows a linear no-threshold model, even at the smallest doses.

A well-documented risk factor affecting CH is exposure to the thyroid-seeking iodine isotopes such as I-131. Previous sources have linked elevated risk for hypothyroidism with nuclear weapons tests and nuclear power installations.

In the US, government officials measured concentrations of I-131 in precipitation up to 211 times above normal during the weeks following the meltdowns.

There were increased concentrations of all beta-emitting radionuclides in the air during the six weeks following the beginning of Fukushima fallout. Compared to the same period a year earlier, the fallout increases were more than seven times greater in the five Pacific/West Coast States, compared to just over two times in the remainder of the
US.

The largest gap between the two groups of states occurred in the period March 17 to June 30, which represents fetuses exposed to environmental radioiodine during the third trimester of pregnancy.

States were asked to provide only confirmed primary CH cases; these are newborns who test positive for the condition, and require therapeutic intervention to avoid adverse health effects.

All US newborns diagnosed with primary CH born March 17-December 31, 2011 were exposed in utero to radioactive fallout from the Fukushima meltdowns.

[The data in this paper requires] confirmation and expansion, including long-term follow-up of infants and other children. However, the current findings should be noted, and encourage the conduct of future analyses of health effects from exposures to Fukushima fallout.

Fukushima fallout may be causing illness in American babies: Study

Details about this research paper and other related findings from the Natural Society website.

A Year After Fukushima: How Life Has Changed For People in Japan

Could Iran be the location of the next nuclear reactor accident and radiation spill (affecting Middle Eastern countries to the south/southwest? (Foreign Policy magazine)