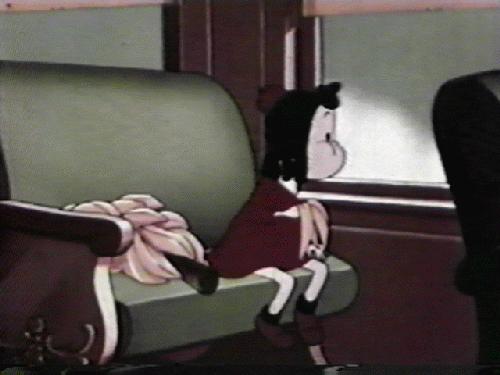 If you keep your eyes about you, you will discover gems in your local garage sale or school fair. If you still have a video machine at home you will be able to play videos of older cartoons that might still surface – videos like Little Lulu & Friends (a reprinting sold in 1991). This particular edition shows the earliest version of Lulu, which is particularly charming. Take a chance on these movies because you never know what you might find.

There is something so refreshing about the simplicity of the storylines in older cartoons and the simple colours and lines of the images. Loose in the Caboose is a Little Lulu cartoon from 1947. Little Lulu is just one of the many charming cartoons that were produced in the early 20th century.

Racing through the pantry.

Sliding on the floors.

Hiding in the closets. Slamming all the doors.

How can a lady as little as you,

raise such a rumpus and a hullabaloo?

Always in and out of trouble, but mostly always in.

Using Daddy’s necktie for the tail on yoru kite.

Using Mommy’s lipstick for the letters you write.

Though you’re wild as any Zulu,

And you’re just as hard to tame.

Little Lulu, I love you  Lu, just the same.

Which 20th century cartoons do you favour?

Little Lulu and Other Cartoon Classics