It isn’t an earth shattering revelation. Someone writes online about a disappointing experience with a McDonald’s product and maybe a few people read it.   End of story.  Food bloggers everywhere are not only busy cranking out pieces on these types of topics, but they are also putting their well-honed food critique skills to good use.  So I will not pretend to be a food critic as I discuss my recent experience at a well-run, clean and freshly decorated McDonald’s in the TriCities area of the Lower Mainland. 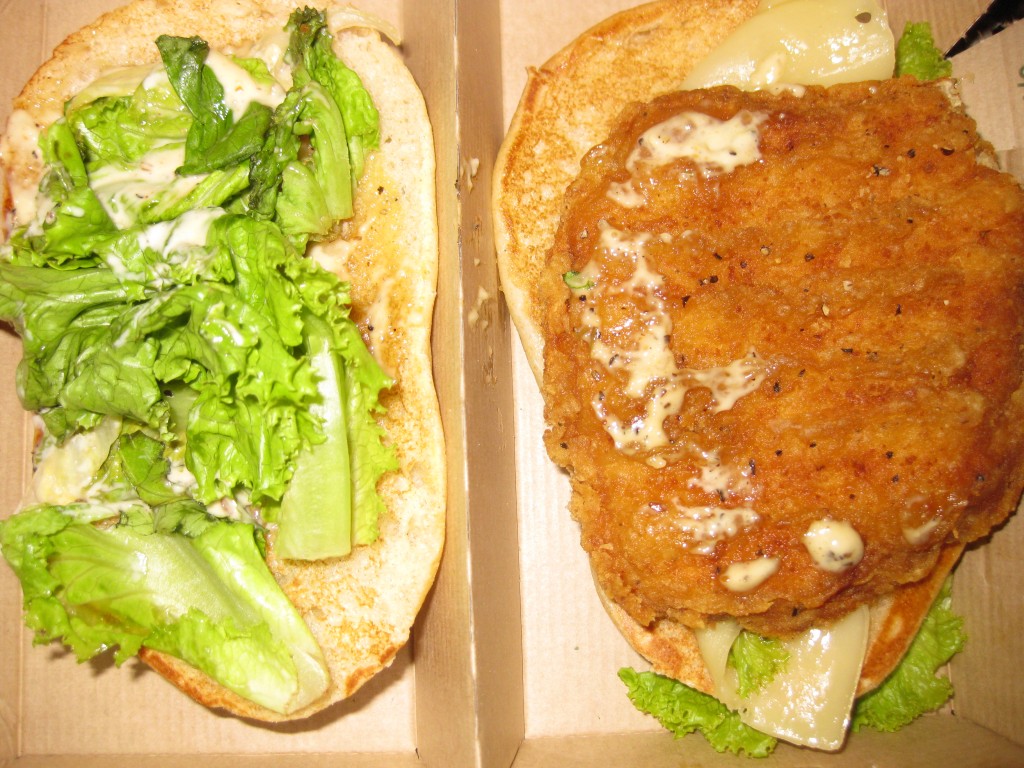 What I can say is that I’ve been buying burgers at McDonald’s since the days when you could take a gander at the sign and see exactly how many people had eaten at McDonald’s around North America.  I first tried McDonald’s in the mid 1970s.   This does not make me one of the earliest customers, but a fair bit of time has passed since then and much has changed at the organization.  The other day, as I stood in line waiting to try the new Supreme Chicken Sandwich, I couldn’t help noting how jazzy and fresh looking the photo-filled menu was.  My husband wanted to try a salad, so I purchased the new Tuscan Salad with Crispy Chicken, Sunflowers and Cranberries.  As it turned out, this was a healthy choice and he proclaimed the exercise to be a success. After the photo shown below was taken, he decided to add the cranberries that were provided. 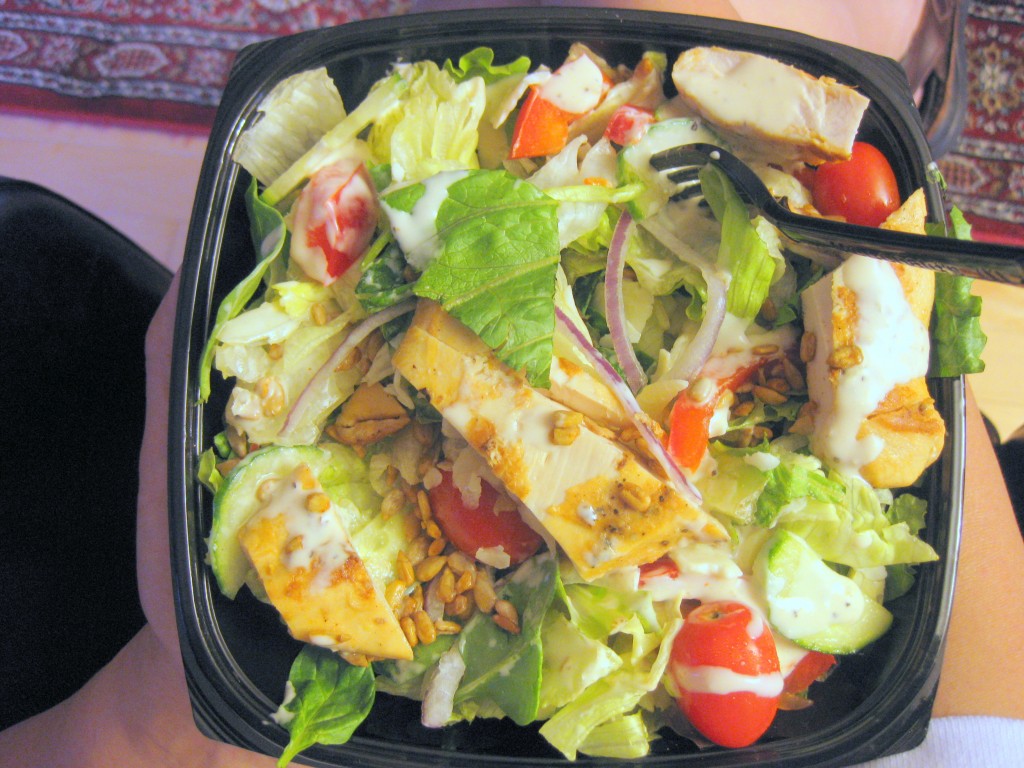 We decided to pull over and get take-out from McDonald’s because I had fallen for the billboards along the road announcing the arrival of the Supreme Chicken Sandwich with mushrooms and Swiss cheese.  So this was to be my choice; however, in comparison to the salad it turned out to be disaster.  The most shocking revelation that I discovered after returning home was that the sandwich did not contain one single slice of mushroom.  I was so stunned I had to haul out my camera, take photos and then make a short video to document the evidence.  As you can see there is some fairly nice looking lettuce in the sandwich, a touch of sauce on the lettuce, a heavily fried (but that’s what I get for not going the grilled route) chicken, half melted Swiss cheese on a respectable ciabatta bun and there are no mushrooms. 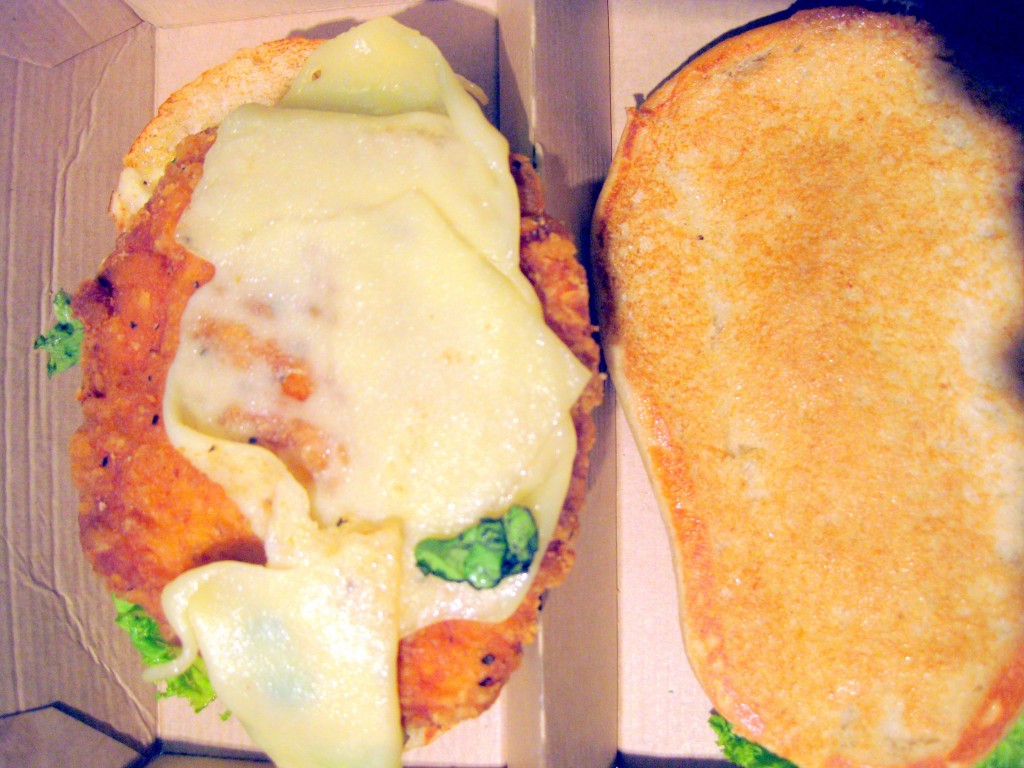 “You’ve got to be kidding”, I exclaimed.  I checked my order and took a photo of the box.  Yes.  There it is on the receipt and on the tag.  This is, indeed, supposed to have mushrooms. 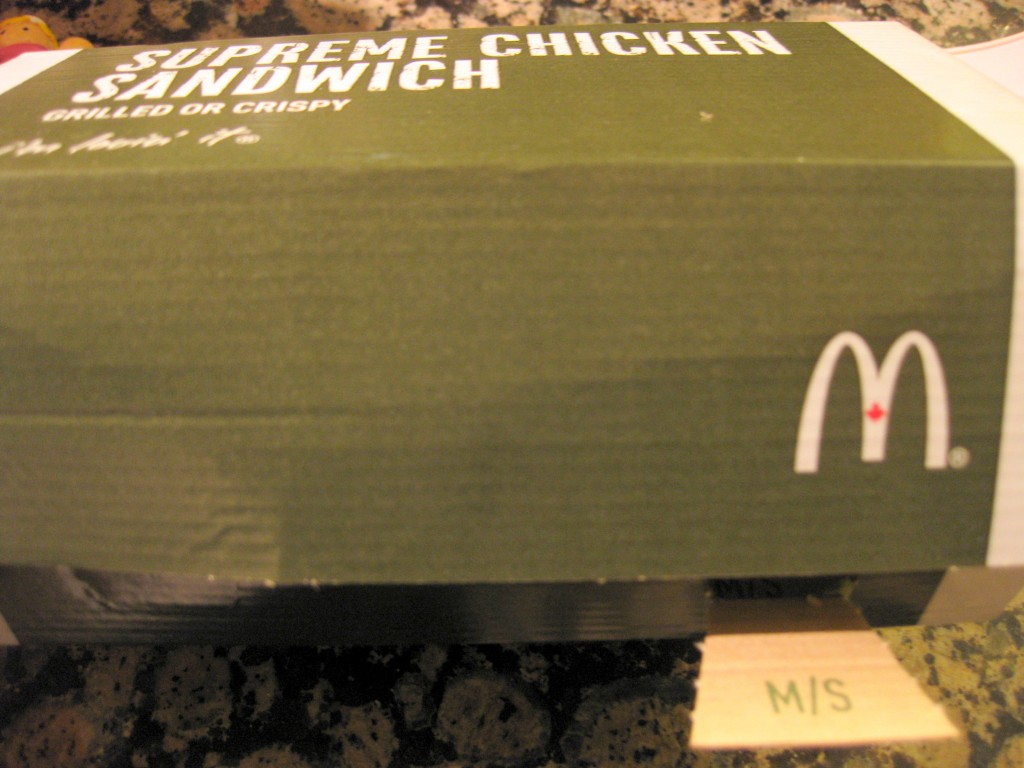 It used to be that I would order a hamburger at McDonald’s.  When I got older I ordered a cheeseburger.  Then I got hungrier so I ordered two cheeseburgers.  Finally I switched to their chicken products.  Since I started visiting McDonald’s in those early days in Quebec, the disastrous Super Size Me movie came out and McDonald’s pulled up their socks in the healthy offerings department.  The development of elaborate, healthy salads such as the Tuscan Chicken Salad meet the needs of the health conscious and the health critics. 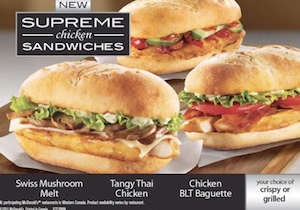 The realm of hamburger and chicken burger-like creations is another matter.  Except for special features such as the Angus Burger, which has been available at some locations, so many of McDonald’s products fail to impress.  You can expect to open a mediocre bun and find a patty of meat, some kind of lettuce, one inside bun surface that is dry, a gob of sauce and some other feature like a pickle or tomato, for example.  In many ways I think the beef burgers get slightly better treatment than the almost always disappointing chicken fare.  The Supreme Chicken sandwich was no exception.

As a child living in Quebec it was a rare treat to go to McDonald’s.  Let me emphasize that point.  It really was a treat.  In fact, money was so tight in those pre-80s boom years, we rarely went to McDonald’s.  Our visit was a special entry in my mother’s monthly budget. I still remember when I took a small group of friends to McDonald’s for my 7th birthday.  I recall how magical it felt to order food as a group and receive some special birthday goodies from McDonald’s.  (In those days they didn’t have special McDonald’s toys like they do now.)  We moved overseas for a number of years afterwards and my brother and I always asked to go to McDonald’s, again as a treat, when we happened to be visiting Canada.

Nowadays I would hardly say that going to McDonald’s is a treat.  The other day, when we bought our salad and chicken sandwich, we happened to be returning from a drive out to Mission. It was getting late and we really wanted to eat. So McDonald’s it was.  “I NEVER want to eat at McDonald’s again”, I declared. “Every time I go, I try something new and I keep hoping it will be better.  I swear they just get worse as the years go by.”  Perhaps memory glosses over the reality of the 1970s product, but it seems the modern day product looks more slapped together than it used to be. I won’t bother describing how my toddler twins, who usually love eating roast chicken, refused out right to eat their grilled chicken pieces wrapped in pita.  I concluded that the quality and taste must be so bad, they didn’t want to eat their food.  I felt like a bad mother for feeding them McDonald’s.  Oh how the times have changed!

To be fair there wasn’t anything really wrong with the Tuscan Chicken Salad.  If you don’t want to be disappointed, stick to the salads.  As for the team at the McDonald’s headquarters deep in the heart of the USA, I know you have nutritionists, a head chef and all kinds of tasters.  All I can say is “stick to salads” because you’ve lost the touch when it comes to hamburgers and hamburger sandwiches.  Let places like White Spot take care of the fast-food burgers!

Advertised burgers next to photos of actual burgers

Behind the scenes of a McDonald’s commercial shoot.