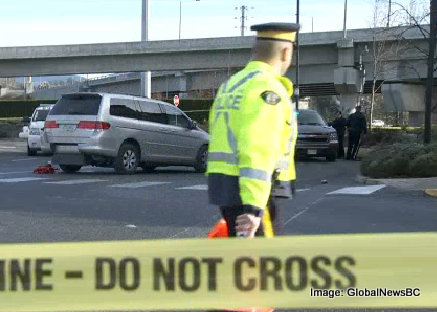 Recently a local TV news station featured a report about in ground LED lights for crosswalks. Currently Delta is the only jurisdiction in BC that has them. They are used on two crossings in Delta and are popular in many other cities in North America.  When BC authorities reviewed this option over a decade ago the lights were not as well designed as they are today.  Upkeep at the time would have been more labour intensive.  It was pointed out in the report that it’s time to review the positive benefits of installing LED lights on our road.  As the Delta example shows, each city can make their own decisions about installation of these lights.

This past week in the Lower Mainland there has been a continuous stream of stories about people who have been killed in pedestrian-vehicle accidents. Today in Coquitlam two senior citizens – a husband and wife – were fatally wounded at the intersection of Gatensbury and Austin avenue.   It’s hard to understand how there could be a visibility issue on a clear, bright afternoon.  A few days ago Riddick Servio – a 2 1/2 year old boy – and his mum were hit by a car at an intersection near a busy area where cars prepare to enter Lougheed Highway.  The mother’s leg was badly broken and Riddick, tragically, did not survive the accident.  What parent doesn’t think that if you are holding your child’s hand and walking across a crosswalk near a shopping mall that you would be safe? Could there be more assertive signage at busy crosswalks such as this one to protect pedestrians?

The next day a local news station was interviewing the mayor at the spot where the accident happened.  As we heard about how there are stop signs in place, a woman was driving by in her SUV, talking on a cell phone and barely aware of her surroundings as she drove.  When the TV crew told her to hang up her phone she looked somewhat stunned and convicted.

Recently a pedestrian was also killed in Richmond in an accident that might have involved alcohol.

Imagine that you are driving along the road in dark, rainy or poor visibility conditions.  Let’s imagine these scenarios rather than one that involves speed, distractions or alcohol, for example.  If LED in ground lights were in place, the pedestrian would call the lights and you would see a series of blinking lights across the road as the pedestrian crossed. Imagine that it’s night time, the pedestrian is wearing dark clothes, it’s raining and you don’t know the road that well.  Perhaps you’ve driven around the corner and you weren’t expecting a stop sign. Here in Coquitlam we have a five way stop sign right at the top of a steep hill.  On a dark, rainy night, it is an intersection that could take a driver unfamiliar with the area by surprise.

It might be expensive to install the lights on all crosswalks but municipalities could start with busy roads, school areas and problematic intersections.  Additionally, there are other products such as blinking stop signs that reduce “blow throughs” by 52.9% and incomplete stops by 28.9% . In the TAPCO video included below, blinking stop signs are shown near shopping malls.

Another option are enhanced crosswalks that do not include in-ground LED lights but do have a flashing bar on top of a strongly visible pedestrian crossing sign.

Would you be interested to contact your BC municipality to suggest blinker signs, in-ground LED crossing lights and enhanced crosswalks? Are you a member of the main stream or social media communities?  Could you write a piece or produce a TV news piece that discusses these options? If we can make videos about Miley Cyrus bending over “go viral” by way of our sharing on social media, couldn’t we work together to help protect the lives of British Columbians?  You can comment about this posting using the comment function below or on the BCFamily.ca Facebook page. Your contribution matters so don’t be shy!

A discussion about crosswalks in Portland, Oregon.