Now that the Stanley Cup Finals are over, some thanks are in order. Our thanks go out to:

* The Vancouver Canucks:   For plowing through to the end and making it to the Stanley Cup Finals. This is no small feat.  As the Boston Bruins know, it’s not a direct line to the Stanley Cup.  This is the third time that the Vancouver Canucks have lost in the final series.  The Bruins lost five times since 1972 before winning in 2011.  Here’s hoping we don’t have two more riots until we win!

* The Sedin Twins:  Sure some may question how you fared in the Stanley Cup Finals.  In fact quite a lot of fans are not too happy about their performance in this final series.   Still, we’d like to thank both of you for the example you set to younger hockey players and fans.  It’s said that the Swedes don’t fight in the NHL, and you’re staying true to that tradition. Sure you’ve received some penalties for inappropriate actions, but in general you take an intelligent and measured approach to the game and we appreciate you for that.

* The Vancouver Canucks (again) for coming in second:  In countries like Japan there is a mentality that you either win gold or nothing else matters. Japanese journalists will interview silver medal winners during the Olympics and ask them why they didn’t win the gold.  Sure there’s only one cup, but we still think it’s special that you made it that far and won the President’s Trophy to boot.

* The Vancouver Canucks coach Alain Vigneault:  We enjoyed listening to your post game commentary and your thoughtful approach to post-game discussions.   You brought a gentleman’s perspective to the game. It looked like you were nearly in tears after the final loss.  Perhaps we read your body language wrong, but we feel for you and your team.  We’re lucky to have you with us here in Vancouver.

* The young Vancouver Fans: If you were near a school in the days leading up to the final game you would have seen children setting up mini hockey nets during breaks, enthusiastically organizing their teams and playing their hearts out.  Meanwhile the younger set in the toddler/Pre-School Strong Start programmes were honing their newly acquired hockey skills.  …and we do mean young.  Think under 2!  Not only did the Stanley Cup playoffs inspire the children, but their youthful enthusiasm for this Canadian sport inspires the rest of Canada.

* The Boston Bruins: For going “all out” during the playoffs.  You played to win, as the saying goes, and shared your enthusiasm for the game with your American contemporaries.  Some of them said some unsympathetic comments regarding your aspirations. Oh well. That’s the sporting world for you. It’s true that a good proportion of your team are Canadians, but you’re part of the Original Six and you represent the unique sporting culture of Boston that we could see in the bleachers during the Boston home games.

* The City of Vancouver: For setting up the Vancouver fan zone downtown.  Sure the implementation was faulty because it created an environment ripe for rioting when the Canucks lost.  But there were also  many happy moments created in the zone during the series.  But you do need to revise the plans for the next playoff season.

* Mayor Gregor Robertson and Premier Christy Clark: For making it very clear that the City of Vancouver and Province of  British Columbia will continue to support big public gatherings and large celebrations.  This will help us to combat Vancouver’s reputation for being No Fun Vancouver.  Lower Mainlanders needed to hear about this commitments. The Winter Olympics 2010 spirit lives on.  Go Vancouver go!

* The Vancouver Police Department on the ground after the games (and their colleagues from neighbouring cities):  We know that you shared in the disappointment that the Canucks lost.  Then you were significantly understaffed as you attempted to deal with the ensuing mega brawl and vandalism that took place. Important recommendations from the 1994 riot were not fully implemented.  Further assessment of police preparedness is needed.  But as Ian Hanomansing made clear on The National after the game, there was clear evidence that the police had learned from past situations regarding how to deal with crowd control and irate crowd members. It’s easy to criticize the approach of the police, but they’re also the first people we look to when things aren’t going well for us and our neighbourhood.

* All-weather Canucks fans:  We admire you for not being fair-weather fans.  During the Boston home games you kept your eye on the TV, despite the painful scoring deficit.  The Baby Boomer grandma who asked the Gen X father why he was still sporting a Canucks sweater post-game six would not be an example for children to follow as they develop their understanding of good sportsmanship. 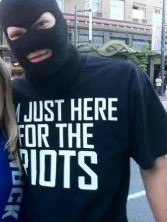 Apparently this photograph was taken before the game started.

So this man was waiting for trouble to start? (Photo source)

* Canucks fans downtown: Thanks to the Canucks fans who left the downtown core as soon as they could make transport arrangements, thereby leaving the police to do what they needed to do to clear out the organized rioters, aggressive and resistant crowd members, drunkards and looky-looers hoping to records videos for YouTube.  During a crisis situation we either choose to be part of the solution or part of the problem.  There is no middle ground. 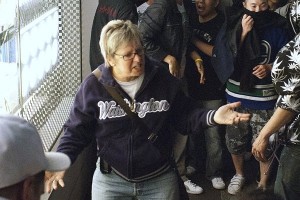 The Globe and Mail is attempting to determine who this brave fan is. She protected the Holt Renfrew storefront from aggressive crowd members. It’s suspected she may be a University of Washington alumna.

*Brave fans downtown:  Some brave fans took a stand with the rioters.  It was a risky move, this is true.  But it was also an example of civic responsibility in action.  We admire you for your courage and conviction.

* The Vancouver Clean-up crew: Thanks to everyone who headed downtown to help with the cleanup the morning after the riot.  That’s the spirit.

* BC-based social media users: Thanks to everyone who shared information about what happened during the series, the ensuing riot and the cleanup afterwards.  When it comes to sharing information,  the average citizen has as important a contribution to make as any member of the media.

* Finally at BC Family a big thanks go out to Brian O, Warren Wong, Kim W. and Laura B for sharing their enthusiasm and celebration ideas for hockey nights in British Columbia.  The Vancouver Canucks are fortunate to have you in their fan base.

The Vancouver Canucks team mates speak about the riots, their loyal fans, the real Vancouverites and civic pride.