A few days before the much anticipated Paul McCartney concert in Vancouver, I visited Tim Hortons with my husband and three year old twins.  At the next table a frail and elderly man sat with two caregivers.  He had a walker nearby, spoke and walked slowly and had long, uncut hair.  Most of the time he sat bent forward, looking at the table.   As I was waiting for my husband to return with our food, I couldn’t help overhearing his comment about one of my 3 year old twins.  “He looks like a young Paul McCartney”, he told the women.  It seemed that Sir Paul’s highly anticipated arrival, after a 48 year absence, was on everyone’s mind – even a man who is living a quiet life in a care home.

When my husband returned, I repeated the comment and he nodded and smiled in response.  He has been a life-long fan of the Beatles and the individual artists who made up the group.  Since his childhood he has collected their records, CDs and iTunes and appreciates the artistry in their musical compositions and lyrics.  “Their accomplishments have never been surpassed”, he tells me with confidence.   I owe Sir Paul and his colleagues my sincere thanks for giving website members early access to tickets. 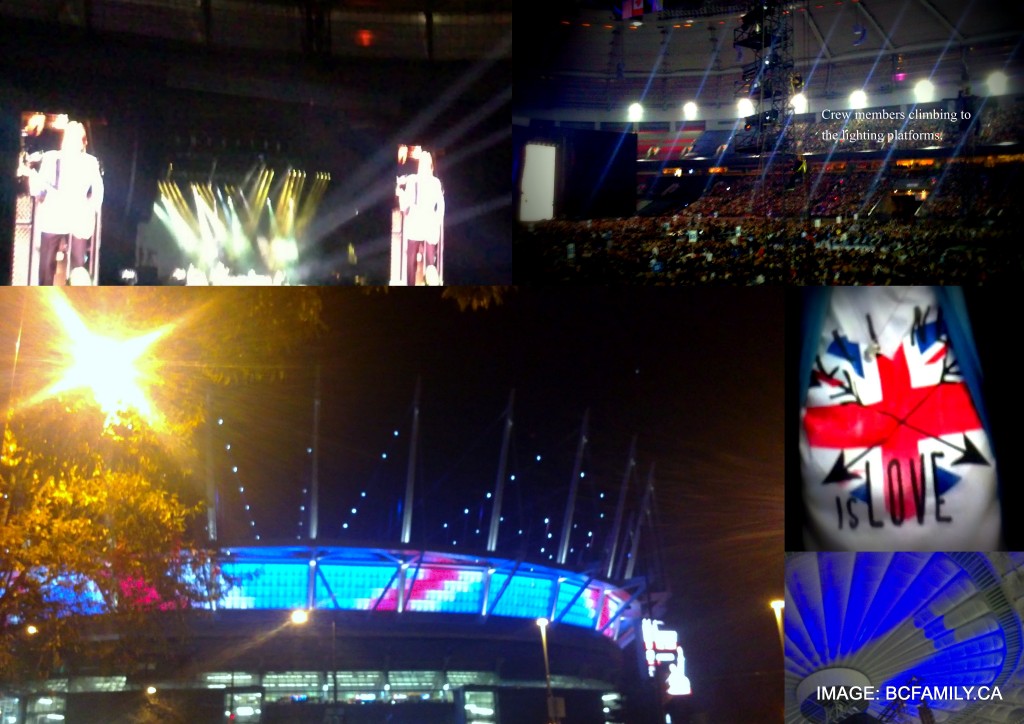 On Sunday night I donned the Union Jack t-shirt I bought, we drove across the Lower Mainland and left our children with family members who generously agreed to help babysit.  After a rare “date night” snack in our old stomping ground – Urban Fare –  we arrived early at BC Place.  It was immediately evident that the dominant age group in the crowd was 60 something.  Although there were a good number of people who were anywhere from elementary school age to under 50. Even though I have experience visiting the 50+ gated community where my parents live, I’ve never been surrounded by so many people from the older Boomer generation. In particular I noticed the way some of the women dressed with flair.  One woman had on grey ankle boots, that looked like they were made of lace, and a grey layered top that would be at home in a  designer’s clothing store in Tokyo.

Who are all these elegant people?, I wondered.  Are they lifelong Beatles/Paul McCartney fans like my husband?  Have they seen him perform before? Do they live around here?  What have they been doing with their lives while Paul has been furthering his career? What are they doing now?

While I observed people in the crowd, I was reminded that we live in a society that is fairly segmented.  Some of us beat a path to an office five days a week.  Some of us live somewhat isolated lives staying at home with young or elderly family members, while others are retired and pursue interests more unique to retirees.  We cross paths in our roles as child, parent, grandparent, family member or, perhaps, former colleague.  The Paul McCartney concert was a rare opportunity for a truly inter-generational crowd to come together. 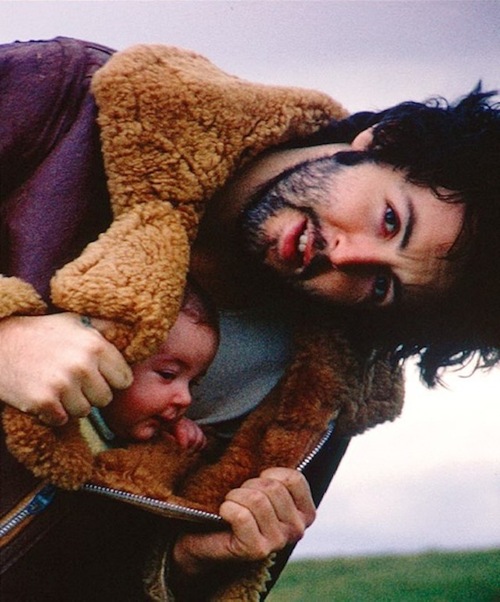 During the hour before the concert started, a thought provoking collage of scanned photos, memorabilia and video clips scrolled vertically on either side of the stage.  It was a treat to see material relevant to a career that has spanned six decades and taken place around the world.  Sir Paul has played for thousands of screaming fans, royalty, heads of state, media personalities and average folks like me. During the show the multimedia presentation of photographs continued and was woven together with more abstract images, lighting and even pyrotechnics.  This celebration of photography is fitting as Paul McCartney’s first wife Linda was an accomplished photographer. In one set a beautiful photo (slightly different from the one shown above) and a video featuring Mary McCartney appear in the background.  The McCartney family photos are “heart stoppingly” beautiful.  At a time when it’s easy to snap a digital photograph, these photos are a reminder that it is important to take time to capture the quiet, intimate moments that we share.

She would have the camera with her but wouldn’t hold it up in your face for a long time, so she wouldn’t be clicking all around you – she’d chat with you, take a snap, put the camera down, so you didn’t have time to start posing and feeling self-conscious. She never intimidated people. (Mary McCartney speaking about her mother, Linda McCartney)

For well over two hours Paul McCartney stood for more than half of the time, jumped up and down, raised his guitar in the air repeatedly with one hand and sweated, visibly, while playing tunes like Live and Let Die.  We didn’t see him take a sip of water once. If you are looking for a poster boy for the healthy, vegetarian lifestyle beyond 60, Paul McCartney is it.  From the start of the concert his familiar, casual and even flirty banter endeared himself to the crowd.  It was a rare opportunity to see a performer so at ease with his audience and exhibit such a degree of humility and sense of wonder about life.  It’s said that Sir Paul rarely gives interviews.  This is a shame because the stories he tells between songs are illuminating.  Before playing a solo rendition of Blackbird, he explained his thoughts about the civil rights movement in the United States and how he was inspired to write the song as a way to give hope to people who were oppressed.  If his daughters Mary and Stella could create a documentary that celebrates their mother’s photography; Beatles, Wings and Paul McCartney archival material; and, their father’s stories, they would end up with a masterpiece. 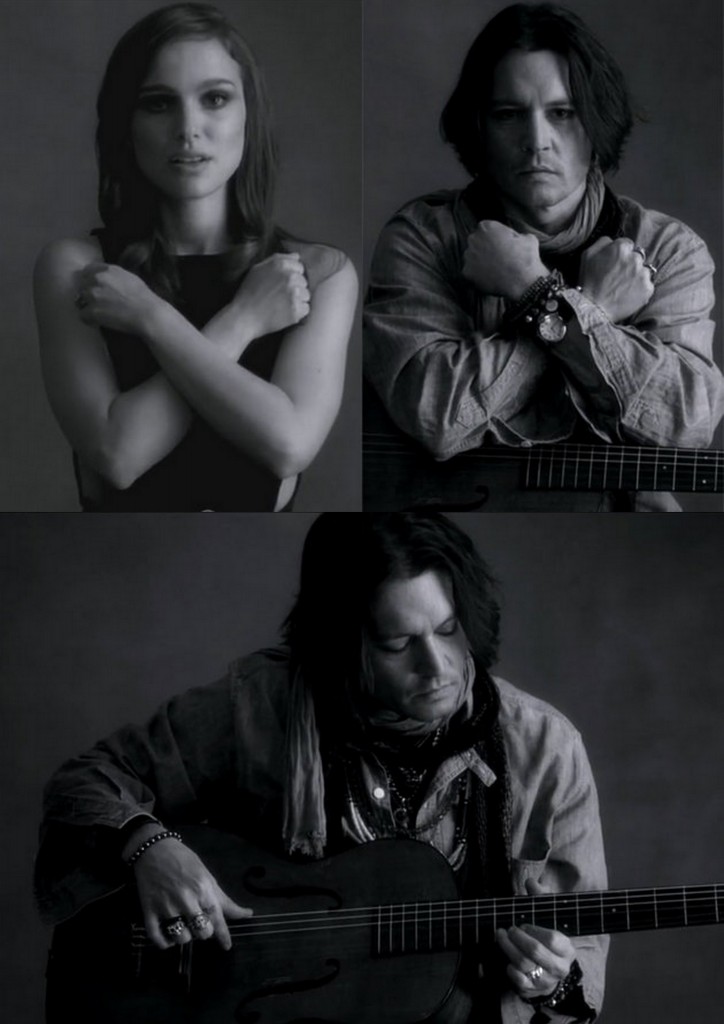 Over the years Paul McCartney has worked with the most famous artists of his generation and has met artists around the world. A background video in the concert featured A-list – but somewhat private actors – Natalie Portman and Johnny Depp signing to the new song “My Valentine”.  (Just hearing their names announced, you couldn’t help but thing “aaah”.)  At one point in the video Johnny Depp plays the guitar.  Paul McCartney wrote the song for his wife Nancy.  The song was inspired by Nancy’s reaction when he apologized for the heavy rain that they were experiencing on their trip to Morocco.  The interplay of the video and the performance on stage was magical.

The day after the concert I showed my personal cell phone videos of various songs from the concert to my three year old twins.  My son (AKA the “young Paul McCartney) loves music and showed a lot of interest in details about the concert.  As he went to bed the day after the concert, he still had many questions about what happened.  (Five days later he has mastered how to say “Paul McCartney”, despite a speech delay, and is still grilling me about the musicians who played with Sir Paul.  Alas mummy isn’t as up on the details as daddy. “What’s the name of the drummer?”  “What kind of guitars did they play?”) While I played the videos for the twins the next day, their heads and bodies swayed and my daughter pretended to play the piano on the table top.  Suddenly they both jumped up and rushed for their toy piano and guitar.  As Paul McCartney makes his way on his world tour, at 70 years young, he is already inspiring a new generation of musicians. 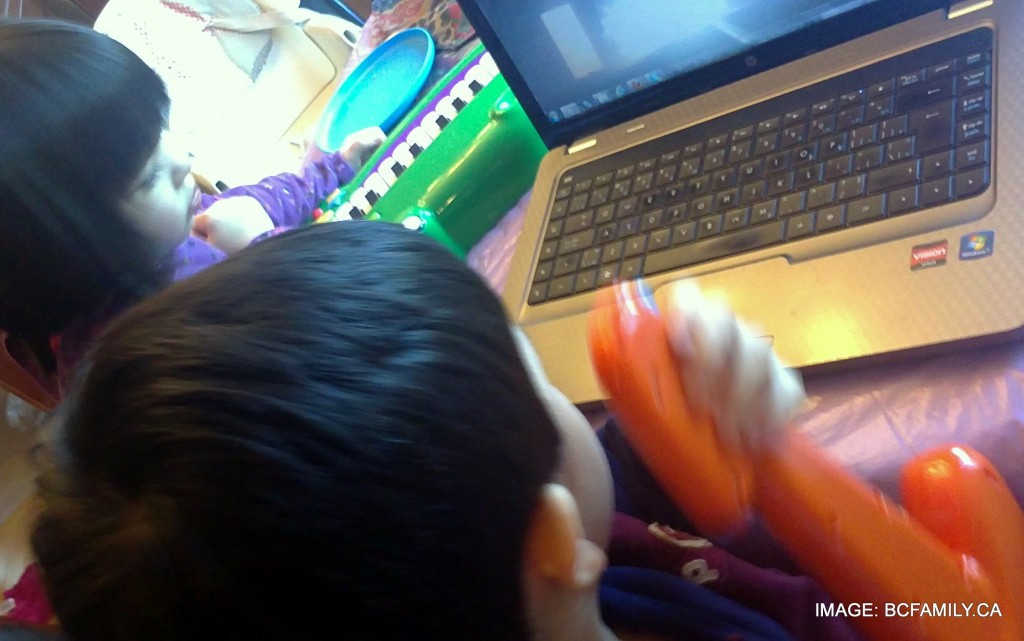 If you are wary about the prospect of entering your eighth decade and beyond, take the time to get to know the lives, work and insights of people like Paul McCartney; your neighbour; an elder in your spiritual or volunteer community; Mother Teresa, who began her mission in India in her 40s; or women like Mary Delaney, who started her major life’s work two hundred years ago  at the age of 72.  We live at a time when there is respect for older generations but we tend to focus on the accomplishments of the young.  While it is true that the human body does become more sensitive and prone to frailness as we age, as Paul McCartney proves, our vision for our work and projects, creativity and ability to inspire only grows stronger year after year.

Vancouver Sun review of the show.

Photos of Paul McCartney at the Vancouver concert.

This short clip provides a less common view of audience participation, from the perspective of a concert goer.  It has been shared as a compliment to this piece.

2 thoughts on “The Return of Paul McCartney”