Many articles have been written, tweets shared and posts posted in the days since Gwyneth Paltrow’s  “conscious uncoupling” idea has become a much discussed term.  Since then there has been a new kerfuffle as women discuss Paltrow’s comparison of actors on set versus women in the office who are also mums. Much of what has been shared feels reactionary.  Only friends of the couple will know for sure how fair and accurate the media portrayals have been.

It’s much harder for me. I feel like I set it up in a way that makes it difficult because…for me, like if I miss a school run, they are like, ‘Where were you?’.  I think it’s different when you have an office job, because it’s routine and, you know, you can do all the stuff in the morning and then you come home in the evening.  When you’re shooting a movie, they’re like, ‘We need you to go to Wisconsin for two weeks,’ and then you work 14 hours a day and that part of it is very difficult.  I think to have a regular job and be a mom is not as, of course there are challenges, but it’s not like being on set. (Gwyneth Paltrow to E! Online)

Not surprisingly, another journalist managed to find a Brentwood neighbour who reported that it was Chris Martin who took their children to school most of the time. Truth or fiction?  We’ll never know.

I’ve watched these stories unfold with a slightly removed perspective.  Confession – here it comes – I’m a Goop.com subscriber.  That is I receive Goop.com E-mails in my inbox.  I thought I might have been an early subscriber but not quite from the beginning.  Looking at my inbox I see that – oops – I’ve been a hardcore subscriber since the fall of 2008.  That’s 5 1/2 years of e-mails with links to bespoke living advice about food, fashion, interior design, exercise, travel and a number of other topics.  At first I found it interesting to learn how the affluent set live.  Every now and then – very rarely – I might pick up a hint of inspiration.  I really wanted to like Goop’s content but in reality I’ve ignored as many E-mails as I’ve read. 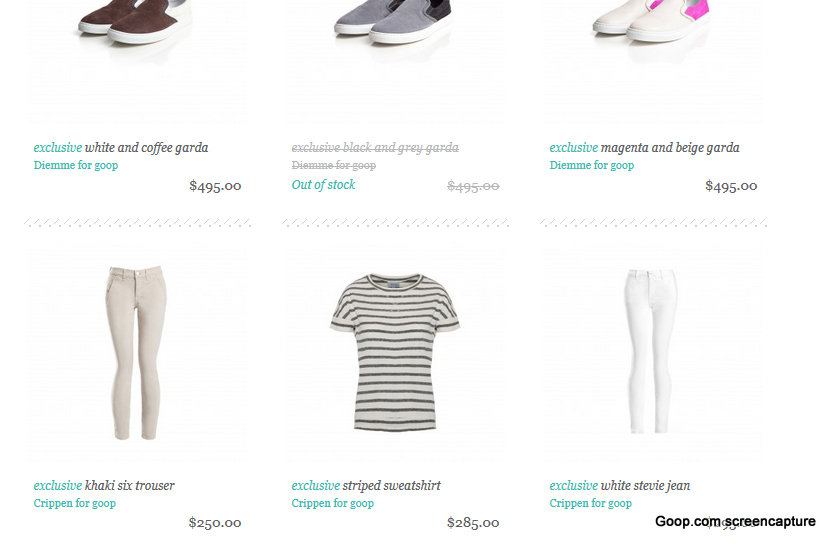 The beautiful life Paltrow presents meets the needs of someone other than myself.  Here in British Columbia, where the cost of living is high and job prospects are limp, how many of us can afford $500+  slip-ons (after tax) and $250+ jeans?  Sure I’m all for ensuring children do something other than use technology but it’s not going to happen with a set of cards at $240 (pre tax) and dominoes ($260 pre tax).  Yes we can’t forget the tax in BC!  Prices for Paltrow’s capsule collection collaboration with Stella McCartney start at $795 (US).

It’s true that Paltrow kept details about her marriage and her family life private.  When she did discuss her nutrition ideas with the media following a cookbook release, she was ridiculed for the choices she makes feeding her children.  Perhaps her comments about a specific type of hunger her children experience, in relation to not having some popular food choices, weren’t well chosen.  Paltrow isn’t re-inventing the wheel.  Her nutrition interests appear to align fairly closely with the popular gluten-free+ focus of the Paleo diet.  Perhaps if she’d spoken in those terms, it would have been less of a story.

Since news of the Paltrow/Martin impending divorce broke, journalists have been hunting down details about how their marriage functioned.  There’s no point in repeating them because they are speculation – nothing more.  While Paltrow has spoken about the challenges of being married, the focus on Goop.com hasn’t been to present idealized notions about marriage that might not have aligned with how she was actually living her life.  In the recent separation announcement, journalists did take note that there were additional bits and bytes about conscious uncoupling on Goop.com

“Social research suggests that because we’re living so long, most people will have two or three significant long-term relationships in their lifetime. To put it plainly, as divorce rates indicate, human beings haven’t been able to fully adapt to our skyrocketing life expectancy. Our biology and psychology aren’t set up to be with one person for four, five, or six decades.”

The information presented sounds warm and all enveloping.  Divorces happen all the time and a supportive process that promotes healing is a welcome idea.  But these ideas also smack ever so slightly of an excuse.  One could take away the conclusion that – you see –  we aren’t meant to be with only one person.  Inevitably, we’ll have a number of relationships [marriages?].   Of course this is true for many people but I also see that many of the people in my age cohort have been married for a long time and they’re still going strong. When you couple this information with the hints we have that the Paltrow/Martin marriage might have been very different from what we see in most marriages, how does it make sense for Paltrow to be promoting these ideas?

These products are part of a Goop.com collaboration with another company (that only ships in the US, BTW).

As each year has gone by and the target market for Goop.com doesn’t appear to have changed, I remain perplexed about the content on the site.  Why hasn’t Paltrow created content that appeals to the vast majority of overworked, cash strapped Americans and Britons? Why not create Get the Look for Less content and products?  A good place to start is Paltrow’s interest in, and knowledge about, healthy exercise, nutrition and cooking.  This is where her talents align closest with people’s needs. Read less focus on ideas such as detoxing that receive mixed reviews and more focus on simple, healthy eating. EG hearty soup, easy, homemade soup recipes.  (As per the link just shared.) Where her content needs a complete overhaul is in the area of travel options, fashion and products available for purchase.  Personally I do not pay $200+ a night for a hotel.  I also don’t, and never will, spend $800 on a pair of dress pants.

Many families are trying to get by with one parent in the workforce while the other is at home full time looking after children.  Then there’s the challenges single parent families face.  Somehow Paltrow’s comments and content seem to miss the mark.   There might be a good number of affluent or aspirational upper middle income readers who can prop up Goop (along with looky-loos like me who can’t afford the lifestyle presented).  But there are many more potential readers who simply cannot relate to Paltrow’s passions.   If only the care and consideration put into Goop.com could be channeled into a new focus relevant to a broader audience.  For now, reading Goop.com (at least for me) is about racing to the recipes and buying into a fantasy.