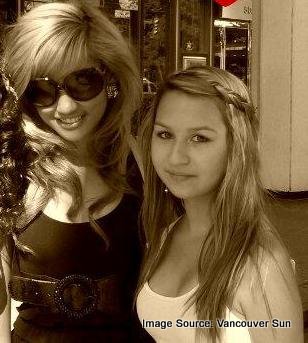 “Amanda Todd…your story has inspired many people to make changes. Changes within themselves and in their communities. With this song, “Wonder Woman” we really tried to comprehend what you were going through. Kids today don’t have the luxury of going home and escaping the bullies. Bullies are everywhere. They’re on Facebook, Twitter, Myspace, Youtube…chat rooms.” Elise Estrada

In written and taped interviews given by Carol Todd, Amanda Todd’s mother, Canadians have heard about the many talents and interests of a BC youth who died after enduring years of cyber stalking, cyber bullying and face-to-face bullying by a stranger and her peers.  Amanda was a talented and active girl who was loved by many in her community.  As Carol Todd has explained, even her pediatrician committed to following her progress through her K-12 years, well beyond when most Pediatric doctors would keep a patient on his or her case load.

Late last week the Todd family shared a photo that music producer Adam Hurstfield snapped of Amanda with local recording artist Elise Estrada.  The photo is a reminder that Amanda took a keen interest in the music world and had developed her own musical talents. Adam shared his heartfelt response to Amanda’s passing in a Vancouver Sun article.  Elise, Adam and their colleagues have also shared a video of the song Wonder Woman which was written for and dedicated to Amanda. (See clip below.)

Here in Canada journalists, parents, teachers, administrators and – mostly importantly – youth have been grappling with the topic of bullying daily since the news of Amanda’s passing was shared.  It’s not the first time that this type of topic has come up and sadly, here in BC, it’s not the first time a youth has died as a result of bullying. However we are seeing, mostly recently in two cases in Ontario, that direct change is happening as a result of Amanda’s story.  Meanwhile students who might have bullied in the past are saying that they’ve had a change of heart after hearing Amanda’s story.

All over British Columbia, Canada and the world youth are saddened not only by Amanda’s struggles and passing, but also by their own personal situations.  Please share this music video in some way (by E-mail, on your social media home page, a Facebook Page or blog) to help support and encourage youth – many of whom might be suffering in silence.

“Maybe as parents we have to rethink this – to realize that while we put the computer in the kitchen or family room so we can watch what our kids are doing, in reality we are sending them out the door with a computer in their hand. […] She was just a typical child but what happened to Amanda can happen to others and it can happen quickly.” (Carol Todd, Amanda’s mum, speaking for the first time publicly at the Mom Inc Movement 2012 Trade Show)

Add your photo to the Just Like Wonder Woman online photo wall.

Amanda’s Army: Song dedicated to Amanda Todd calls for people to take a stand against bullying.

J K Rowling discusses current concerns about bullying and the concept of the threat to the  sanctity of the teenager’s bedroom in an interview.

A Local Tragedy Raises A Lot of Questions (What questions could members of the media and online authors ask about bullying?)

Links on the BC Family page following news stories on this topic.