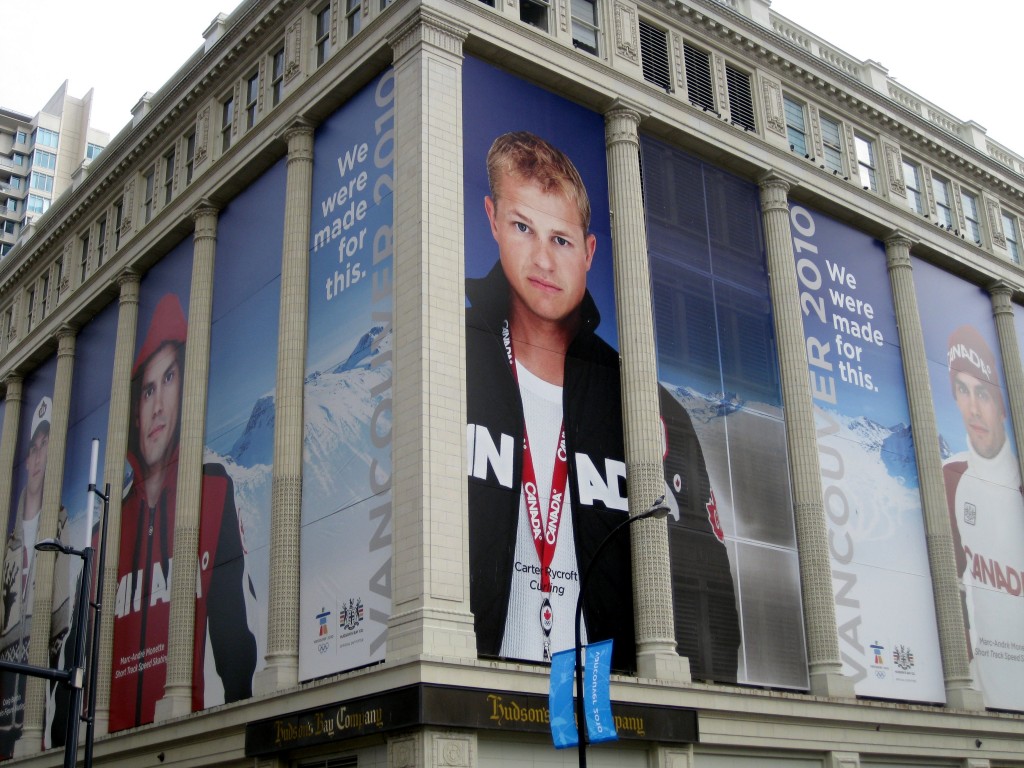 In less than two weeks the 2010 Vancouver Winter Olympics will begin.  So it is only natural that there are two words on everyone’s lips – the Olympics.  So many Olympic related preparations are happening around town, it is almost hard to keep up with the news. Local media (on TV, in print and online) are scrambling to present their take on what is happening. (See http://www.citycaucus.com/2010free for more details.)

While walking through the city you cannot help but notice all of the beautiful banners hanging from lamp posts and on the sides of fences.  The first thought I had was “what will happen to them when the Olympic games are over?”  It seems the Vancouver city council will sell up to 3,000 of its banners to raise money for UNICEF’s Haitian relief.  The remaining 3,000 banners  will be used after the Games to support inner-city community projects in Vancouver.

If you have seen a large T around town, this is the Vancouver take on the circle with a slash used in London to indicate the location of their subway, the Tube.  Feedback regarding the effectiveness of the T can be sent to http://buzzer.translink.ca

While walking downtown it does not take long to notice that security is already tight for the games. As you near the major Olympic venues such as BC place, you will start to see more police officers on the roads and police cars nearby.  I even saw two police officers on horseback at the base of Davie Street near the Roundhouse. Their presence is supported by a network of security cameras that have gone up across the city.  While walking near BC Place recently, three police officers started their sirens in their cars and raced past me. They went up onto the Cambie bridge and swiftly drove back down and surrounded two men. The officers jumped out of their cars and pinned the men to the ground.  So a word of advice to anyone wishing to attempt some monkey business near an Olympic venue  – your efforts will not go unnoticed.

We had glorious, sunny weather this weekend – a perfect time for taking the children for a stroll down Robson street and around the Vancouver Art Gallery.  All along Robson in front of Sears, children, tourists and locals were taking in the lantern festival and other sculptures.  The art installation was a hit and reminded me of time spent walking along promenades in Japan, especially during a festival season.  Watching the visitors engage with the public art, it was a reminder of how stimulating and enjoyable public art installations can be. The artists would love to see the children crawling all over their work.  If you are worried about crowds during the Olympics, this pre-Olympics time period is the ideal time to visit the downtown core.

We walked further to the busy area of Robson Square, where young tikes were in full hockey gear, skating about and people were joining a long lineup.  We never did figure out what they were lining up for but decided that there would be many more of these long lineups in the days to come.  It was exciting to take the children to the Vancouver Art Gallery for the first time.  We will return during the Olympics to see the Leonardo da Vinci exhibition.  At that time entrance to the gallery will be free.  Entrance is usually close to $20.  While some have complained that it is not art, it was also fun to walk below the large scale floral images on the north facade of the building.

Closer to Yaletown work is progressing at a furious place on the attractive Alberta pavilion.  The Irish House looked less impressive on the outside, but the word is that it will be the place to go for a good time.

Meanwhile back at the Olympic Athletes Village there has been much activity as athletes have been arriving, coming and going.  As each delegation gets established, they have been hoisting their flags out of their windows.  We knew right away that the Aussie’s large boxing kangaroo would not go over well with the IOC.  It became a news headline and the Australian delegation has been waiting to hear if they must take it down.  As for the rest of the local politicians, they have been quick to say that they are happy with the yellow critter flying on the side of an Olympic site.  This weekend it was announced that the boxing kangaroo flag could stay.  A note to the Australian media – no one in Canada had an unkind word to say about the flag.  Now they should focus on looking for real stories!

We were pleased to be offered the opportunity to attend the dress rehearsal for the opening ceremonies. As you would have to arrive a few hours early, the whole event requires about five hours commitment.  This was simply not feasible, as we have young children, and we had to decline.  So now we can say we were “almost attendees” at an Olympic event! 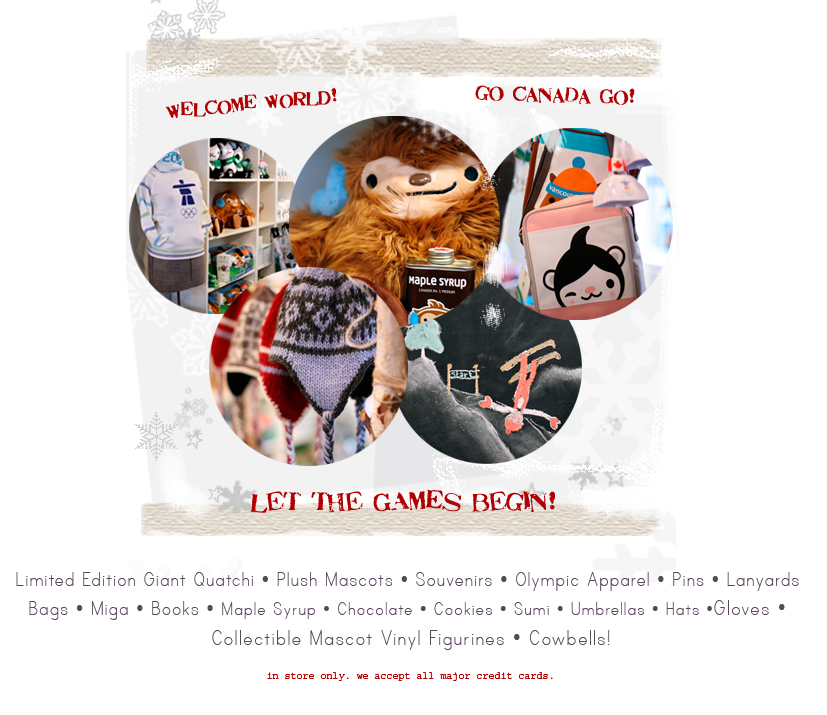 In line with our own advice on this site about dressing up for the Olympics, my children and I have been sporting our Olympic mittens and recently purchased two Quatchi (Sasquatch) stuffed plush animals with their own little red mittens.  The Olympic merchandise display at the Cross Decor and Design (see image above) is a great spot for Olympics shopping. Unfortunately it has not really been cold enough to justify the mittens, but we have still worn them.  As the children are twin babies, they receive a lot of attention when out on their walks.  Now the attention has increased due to their Olympic fashion.  Something tells me they will be meeting a lot of people from around the world, and have already had their image stored in a good number of digital cameras.

While we were downtown we checked out the floor in The Bay where the Olympics clothing is displayed.  It was the busiest part of the store and there was quite a buzz as people were checking out the many different ways that you can dress yourself in Canadian themed clothing.  I’ll be returning this week to buy a sweater for my birthday.  For fun you can also check out the Team Russia booth which displays their Olympic clothing and their mascot.

Yes there were other events going on this week other than Olympics news, but to be honest we are pretty focused on what is happening right outside out windows in North False Creek.  To those locals who complain about the cost of the Olympics, I have one thought to share in reply.  The money has been spent so let’s not waste it.  Let the party begin!

For more information, see our posting about the 2010 Vancouver Winter Olympics:  The Family Games