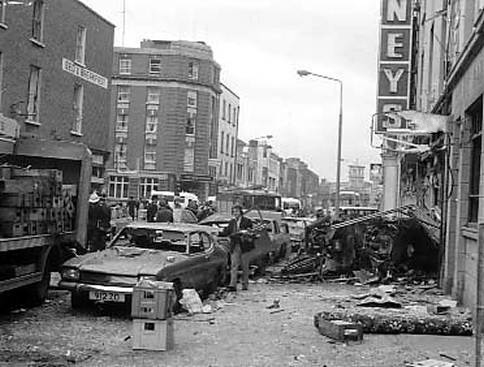 The recent bombings at the Boston Marathon, the shocking video footage of explosions next to a crowded sidewalk and the resulting deaths and injuries are a stark reminder of the terrifying reality of bombings that take place worldwide. On the same day that the bombs detonated  in Boston, bombs killed at least 33 people in a number of locations around Iraq.  This has been an ongoing threat in Iraq for many years. It is estimated that there are approximately 130 armed conflicts every year, worldwide.

In my early childhood, my father narrowly escaped a bombing.   On the day that four bombs were detonated, 33 people died – including babies and an unborn child. (See photo above.)  A 5 year old boy suffered life-threatening injuries and recovered. At the exact time that he was supposed to be at the site of one of the bombs completing an errand at a shop, a “feeling” to not go there was the saving grace. Call it psychic powers, Scottish intuition or the “Holy spirit” – we would not be the family we are today if that “thought” hadn’t happened.

When you live with daily fear that another bombing could harm one of your family members, PTSD (Post Traumatic Stress) can develop.  The residual effect of the bombings last for years, even if you aren’t hurt at the time.

As a family we managed to avoid such a close call to bombings in the ensuing years.  One year an incendiary device was thrown on the path next to my parent’s office.  A school that I attended overseas was rebuilt and was later partially destroyed by bombs, torched and looted.   I experienced regular bomb threats at another school that I attended, but no bombs were ever found.

A friend once told me that her mother was thrown over furniture as a result of a bomb detonating. She was an almost born baby in utero at the time.  A friend of my parents and his 90 something mother described hiding under the stairs when bombs would drop in London during WW2. A CBC journalist who spent a number of years living in Israel with his family once described how he and his wife would mentally draw a line that delineated the areas of the city where they would feel safe to go and which regions they would avoid. If a bomb went off in an area considered to be safe, they would redraw the line. 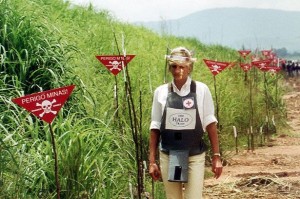 A few years before she died, Princess Diana took the provocative step of campaigning against land mines, which are explosive devices concealed under the ground that function like a bomb. It is believed that her work influenced the signing of the Ottawa Treaty, which took place after her death.  The treaty created an international ban on the use of anti-personnel landmines.  (The Treaty excludes anti-tank mines and cluster bombs.) In a key note address in 1997 Princess Diana said:

“Even if the world decided tomorrow to ban these weapons, this terrible legacy of mines already in the earth would continue to plague the poor nations of the Globe. ‘The evil that men do, lives after them ……’  […] And so, it seems to me, there rests a certain obligation upon the rest of us…… I think we owe it.  […]  The more expeditiously we can end this plague on earth caused by the landmine, the more readily can we set about the constructive tasks to which so many give their hand in the cause of humanity.”

Immediately following the bombings in Boston, the news media reported how people on site who were not hurt ran towards the bomb site to help the victims.  They didn’t know at the time if there would be more bombs and were focused exclusively on the need to help.  Similarly people will show defiance in the face of a lack of mutual understanding, hatred and other dark emotions that motivate people to hurt others physically and psychologically in the name of a cause, belief or world view.   King of Queen’s star Patton Oswalt shared his perspective on social media:

“So when you spot violence, or bigotry, or intolerance, or fear, or just garden-variety misogyny, hatred or ignorance, just look it in the eye and think, ‘The good outnumber you, and we always will.’ “

In The Art of Thinking Clearly Rolf Dobelli writes that news makes us passive. “News stories are overwhelmingly about things you cannot influence. The daily repetition of news about things we can’t act upon makes us passive. It grinds us down until we adopt a worldview that is pessimistic, desensitized, sarcastic and fatalistic. The scientific term is “learned helplessness”. Our individual choices about the information we seek out, and the actions we take in response, on a personal and group level, can combat any feeling of helplessness that we might develop.  We might not be mounting a campaign against land mines, as Princess Diana did, but we will encounter opportunities in our lives to champion goodness in our communities.   The justifications for bombings around the world are rooted in a diverse range of intellectual, emotional and psychological states of mind.   We encounter perspectives such as intolerance  on a regular basis – in person and online. To effect change we can consider joining a community of like minded individuals – in person and online – and pool our resources.  Collectively the efforts of individuals – working together or alone – do matter. As cultural anthropologist Margaret Mead famously wrote, “Never doubt that a small group of thoughtful, committed citizens can change the world. Indeed, it’s the only thing that ever has.” 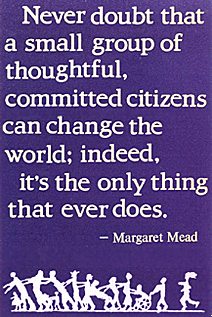 The Aftermath:  What I Learned From the Boston Bombings (GoodMenProject.com)

What Are You Able to Do? [During a crisis.] (GoodMenProject.com)

Images of Freedom and Repression from Freedom House