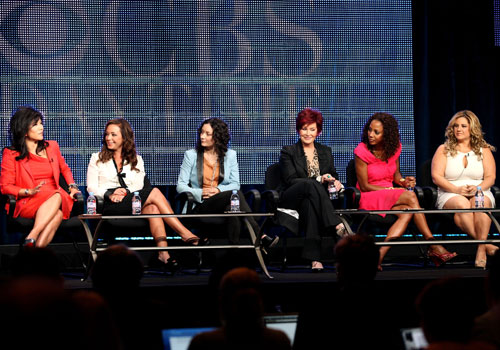 Here in Canada our prospects for Canadian and parent focused content on daytime TV are limited.  If you are a mum there is the Mom Show featuring on the latest “in craze of being a mom”.  For women in general there are fabulous shows such as Steven and Chris on CBC.  Assuming you are a mum who has time to turn on the TV during the day – perhaps for the only one hour you watch all day or night – it might interest you to know that a new “mum-centred” show is coming to TV.  On October 18th, The Talk will premiere on CBS. This new talk show will feature Julie Chen, Sara Gilbert (who is also an Executive Producer), Sharon Osbourne, Leah Remini, Marissa Jaret Winokur and Holly Robinson Peete. The news media has provided us with some tidbits about the focus of the show, including a sneak peak on Entertainment Tonight.  As Brad Bessey, one of the Executive Producers, explains “it’s a show about women getting together and being real and these women are hysterical.  They’re also really great thinkers.” Based on the feedback from the hosts it will be a show that provides support to mums, but is also accessible to people from all backgrounds as the latest topics in the news will be discussed. Discussions that will, apparently, be seen from a mum’s perspective.  Compared to The View, the unifying theme of this show is that all of the women are mothers.

The local media ran a story recently about new shows this season and was not very complimentary about The Talk, explaining that the show will feature the usual topics of the day, including fashion, election information, news about the next chick flick and other typical topics such as TV and reality TV. “Desperate Housewives: You can’t call them desperate and they’re not really housewives. Discuss.” You get the picture.

Somewhat taken about by this cheeky stance, it seemed necessary to talk up this type of show with fellow potential viewers and other  men.  It seems that not all women are in favour of the format and take a rather dim view of the incessant talking, faux conflict and tiresome premise in general of these shows.  Meanwhile one man declared that these shows feature “dumbed down content for women”.

Dumbed down content for women?  Eh?  The View features Barbara Walters and Whoopi Goldberg.  They’re hardly the type to dumb things down.  Here’s Barbara Walters’ take on her show.  “If we were a silly show, it might be different. We have influence, we have credibility, we have honesty and we have humor. This is not a mean show. […]  There was a time under Rosie when people would tune in to see the anger. That’s not true now. They want to hear the arguments.”

Since Sara Gilbert, a Yale alumna, is one of the Executive Producers of The Talk, we hope the negative assessments of talk shows focused on women are dead wrong.  While being a mom may be perceived as an “in trend” (as per the byline of the Mom Show), there is much that still needs to be improved in the world of motherhood and children.  A show by mums and for mums could help to sharpen our understanding of what matters to mothers in the United States and Canada.

Undoubtedly CBS and the Executive Producers know who their target viewing audience is.  Still, the premise of this show begs the question “who is the average mum these days”? Women are getting married later and having children later.  There is a boom in pregnancies amongst the mid 30s and older crowd. Many of the mothers who show up at community center mothers groups in the Lower Mainland have finished post secondary education and have an established career on the go.  They are well educated about aspects of pregnancy and the needs of babies and young children.  They are moms on the go who are in the know.

Keeping this in mind, perhaps we need to kick things up a notch in the “shows for mums” category.  Out go the comfortable homey sets and the safe, upbeat topics.  Let’s bring on some fresh takes on what might entice a busy mum to turn on the TV mid morning. 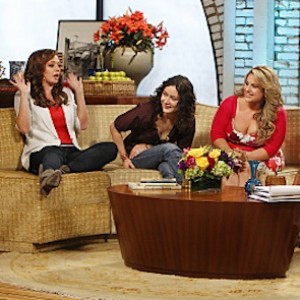 Here is our proposal for desirable features for a new talk show:

–  build a bright, white, ultra modern set with flashes of colour.  Something that would make the relatives back in Italy proud. Perhaps an iridescent backdrop or a deep red, u-shaped couch. Nothing homey.  Nothing discreet.

– invite a broad range of diverse and “of the moment” guests including politicians, authors, entertainment personalities, sports stars, research specialists and academics, older women in their 50s to 80s, notorious and regular members of the public

– ask questions and hold discussions based on in depth research

– invite foreign guests to the show even if they do not speak English.  Provide quick and accurate translation voice over.

– use multiple monitors/viewpoints.  Dotting the stage with additional portable TV screens allows for interesting angles as you photograph the backside of some people (still viewable in the visible monitors) while showing the front of others

– hosts go beyond Top News stories for show content including topics from around the country and around the world.   Include discussions  around emerging trends and information that would be new to the audience and illuminating. Some of the topics feature eclectic and unexpected content from outside of the United States.  A discussion focussed on intriguing aspects of motherhood and parenting in Sweden?  Why not?

– discussions challenge the status quo in the USA.  Day care provisions?  Quality of public schooling? Sustainability topics? Maternity leave? Should it be longer? How should it be financed? Early childhood education provisions?  The slow food movement and urban farming?  The greening of North American cities?  Ethical and eco-friendly choices for the home and family? All of these topics can be made accessible, relevant and interesting to the average viewer? A good laugh could still be had by all.

– most importantly discussions focus on topics from fresh and edgy angles.  If a viewer wants to know what an intelligent woman “feels, thinks and sees – her own opinion” (to quote Julie Chen), she can pick up the phone and talk to a friend.  If she can watch a stylish, of the moment, über chic show that informs and entertains her, while also providing useful nuggets of information  – well now we are talking about must see TV.

As for the dumbed down content?  No thank you.

We’d love to hear your view on The View (and other shows of a similar format).  Do these shows feature dumbed down information for women?  You can let us know by way of the comment functionality below.  We’d love to hear from you.

The Talk walks the walk (Just don’t mention The View…)

A look back at The View from the beginning