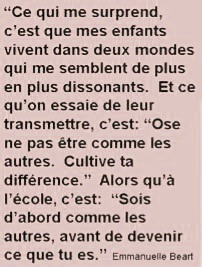 Translation: What surprises me is that my children live in two worlds that seem increasingly dissonant to me.  And what we try to convey to them is “Dare not to be like the others. Cultivate your difference.” While at school, it’s “Be first like the others, before becoming what you are”. Emmanuelle Beart, French actor, 2005

When I was growing up, I listened to my father’s stories about his youth and understood that your teenage years are a time when you strive to be an individual, rather than follow everyone else.  And this was my approach at school too.  One day, while I was mentioning an article I had read in the news media about a scientific topic.  A classmate didn’t believe that the information was accurate. (This was well before smart phones and the Internet). Rather than debate the finer points of the topic, she declared that of course I would believe this information because “everyone knows that you are weird”. Another classmate (who I believed to be a friend of mine) exchanged a knowing look with this classmate.  I have to admit, it was pretty mortifying to have such statement made as if it was a statement of fact in front of all of my classmates.

Why was I being accused of “weirdness”?  I believe it’s because I DID follow my own path and didn’t want to be like everyone else. I’ve told this story to my newly minted teens a few times as a way to give them confidence to be themselves and follow the less popular paths. Oh the horror if they follow others rather than following their own interests.  If someone does tell either of them that they are “weird”, we will spend a good amount of time picking apart what is going on with that person.  Because these statements say a whole lot more about the other person than they do about the so-called “weird one”.

Some years laterI heard a psychologist in an interview.  He spoke about how it is commonly understood that the teenage years are a time when you want to follow everyone else. “Oh”, I thought, “it looks like I didn’t get the memo!”