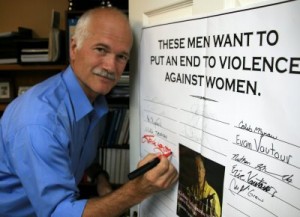 Canadians of all political stripes are remembering federal politician Jack Layton who was, until recently, the newly elected Opposition Leader in the House of Parliament.  Mr. Layton passed away early this morning, after fighting a second round of cancer.  His farewell letter to Canadians was shared today and is being read and circulated widely.  Whether or not British Columbians consider themselves to be federal NDP supporters, Mr. Layton challenged them over the years to define and redefine who they are as Canadians and what they believe.  He would often take these conversations to an immediate level by talking about what Canadians spoke about at their kitchen table.

One of the most notable characteristics of Mr. Layton was his strong presence on Parliament Hill. For many years he was not the leader of the Official Opposition; however, he still responded clearly and strongly to the issues of the day and made the views of the NDP well known in an accessible way.  The remarkable surge of the NDP in the last election was his final success as leader of the NDP party.

Here are some excerpts from Mr. Layton’s last letter to Canadians:

To Cancer patients:  You have every reason to be optimistic, determined, and focused on the future. My only other advice is to cherish every moment with those you love at every stage of your journey, as I have done this summer.

To Canadians: Canada is a great country, one of the hopes of the world. We can be a better one – a country of greater equality, justice, and opportunity. We can build a prosperous economy and a society that shares its benefits more fairly. We can look after our seniors. We can offer better futures for our children. We can do our part to save the world’s environment.

To young Canadians:   There are great challenges before you, from the overwhelming nature of climate change to the unfairness of an economy that excludes so many from our collective wealth, and the changes necessary to build a more inclusive and generous Canada. I believe in you. Your energy, your vision, your passion for justice are exactly what this country needs today. You need to be at the heart of our economy, our political life, and our plans for the present and the future.

In response to Mr. Layton’s words, over on the Tech Vibe Blog Dan Verhaeg challenged young Canadians to “think about how to be creatively heard, and if people eventually respond, you know you will have done a service to the people you walk or drive by on the street every day.”

Many other young Canadians are sharing Mr. Layton’s final closing words in his letter on various social media platforms:

Other thoughts shared by Jack Layton in recent years:

Oftentimes, life’s highs and lows are inextricably linked. That has certainly happened to me and, occasionally, the ups and downs were virtually simultaneous. (Speaking Out Louder, published 2006)

Politics matters. Ideas matter. Democracy matters, because all of us need to be able to make a difference. (Speaking Out Louder, published 2006)

When you bring good ideas forward in the context of a Parliament where no one party has been given the absolute authority to proceed, then you roll up your sleeves, you discuss, you negotiate. (Following an increase of 10 seats for NDP following Federal Election, 2006)

When you’re sick, you present your medicare card, not your credit card.   New Democrats will not stand idly by. We will be fighting each and every day for our precious medicare system.

We need a coast-to-coast child-care system just like our health care. […] It’s time in our society now, with 70 per cent of mothers of young children working in the workforce to make sure we have a child-care system that’s available for those who need it.

What we need to do is stand up for ourselves when we’re unfairly treated.

In your household how do you move ideas from your kitchen table out into the world?  Do you share ideas and concerns with your friends on social media?  Do you use Facebook or Google+? Do you use Twitter and/or LinkedIn?  Do you write a blog?  Do you publish a website?  Do you write for local publications or for websites online?  Do you write municipal, provincial and federal politicians about your concerns?  Do you share your views in the local, national and international media?  Have you joined any local community groups?  Have you joined any political parties?  How has that effort worked for you?  What types of engagement work?  Where are the pitfalls and challenges? Do you volunteer with political party associations during election time?  Do you volunteer for these parties between elections?  Do you attend local meetings held by community activists, politicians at all levels of government and interest groups? What do you think are the most effective ways to encourage engagement with people in your community and with others in your country?

On a more general level, and considering the bleak economic times, how do you maintain an optimistic outlook regarding our economy, socio-economic concerns and the environment?  How do you engage in positive and proactive discussions with your children while discussing their present and their future?   How does your family effect change in your community?

If Jack Layton could have sat at your kitchen table, what would you have told him about how, on whatever small or grand scale, youth and adults in your community are changing their world?

In Pictures:  The Life of Jack Layton