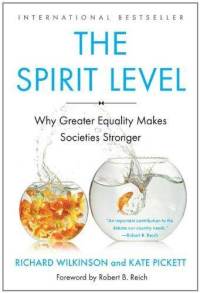 If Americans want to live the American Dream, they should move to Denmark.

If you have ever been to Denmark, or know how issues such as access to early childhood education are addressed there,  this saying will speak to you.

Forget Occupy Vancouver, the Occupy movement and their 99% slogan for just a moment.  Discussions and research about inequality in society have been ongoing for much longer than this movement has been in existence.  In this 2011 presentation, shown below, British Professor Richard Wilkinson offers up findings that focus on why economic inequality in Canada should be a concern.  As we listen to his talk, or read his most recently published book or website and blog, we can think about how these issues can be addressed at a municipal, provincial and federal level.

Professor Wilkinson’s main point is that the average well being of children in our societies is no longer dependent on national income and economic growth.

As you watch the talk, take note of the Child Well Being Graph in more equal countries at the 4:45 minute  mark.  This is a topic that does come up in the Canadian media, from time to time, and is a factor when we consider how our public education in Canada fares compared to other societies in relation to the rate of inequality in Canada.

How well do Canadians trust each other compared to citizens in other countries?  See the graph at the 5:50 minute mark.

At the 8:40 minute mark it is interesting to note that social mobility is lower in countries such as the United States, where one’s father’s income plays a more important role in your life’s outcome.  Does this mean that it is harder to achieve the American Dream? It would seem to be the case.  Any American working in Canada will tell you that in the United States you hit the ground running early in the day and work long days. All this in a country where the social welfare network is much less developed than it is in Canada.

At the 9:40 minute mark you will find a graph that pulls together data related to life expectancy, math and literacy, infant mortality, homicides, imprisonment, teenage birth, trust, obesity, mental illness (including drugs and alcohol addication) and social mobility. Comparing the index of health and social problems to levels of social inequality, Canada’s results come out squarely in the middle.  We are not living in one of the worst places in the developed work, but neither are we living in one of the best places.

Here are some other points that Richard Wilkinson makes:
*  We need to address taxation issues. This isn’t an topic that just affects billionaires in the United States.  Here in Canada our tax rate is below the OECD average. Some argue that we could afford to be paying MORE taxes. Yes you read that right.

* Infant mortality and homicides rates are higher in unequal societies.

* There is an inverse relationship between sense of trust and inequality in society.

* Even the rich are worse off in more unequal society.

Politicians in countries such as the United Kingdom have been dismantling their social contract since the early 1980s.  What do Canadians have to say about their own commitment to achieving great equality in our society?

Are we committed to this ideal?

How does the level of commitment differ from one political party to this next?

How do the policies that our municipal, provincial and federal governments develop support equality in Canadian society.

A Quarter Century of Economic Inequality in Canada