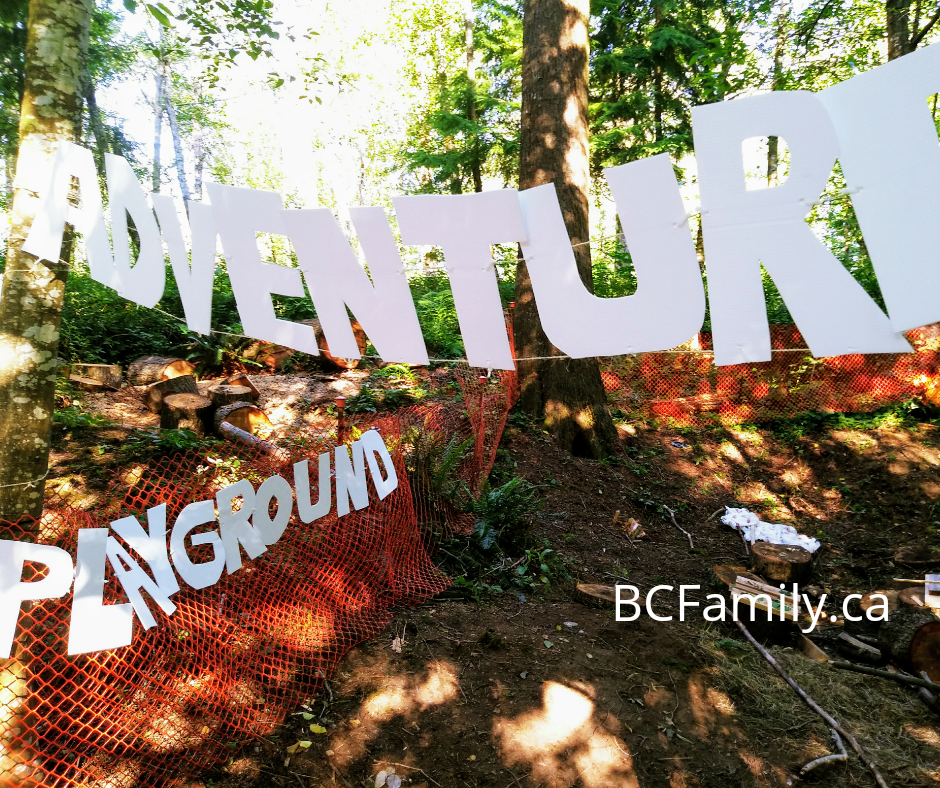 The timing couldn’t have been more perfect.  This autumn, my twins will prepare to enter senior elementary at their Lower Mainland elementary school.  As they are maturing and becoming more independent, it really hit them this year that they want to have the kind of summer that has that unstructured and self-defined ‘ 70s vibe they’ve been thinking about.

A 1970s summer means that they didn’t want to do summer school and they didn’t want to do any camps.   But my son is quick to explain to people that he is having a “70s summer” but without the opportunity to ride his bike all over by himself.  You can imagine that he was pretty keen to hear that the City of Coquitlam was planning to open a outdoor adventure playground in a wooded setting.  “We’re going to go on opening day”, he declared.

We went for the first time this week and he had a grand time.  His sister wasn’t quite as enthused.  This isn’t because the playground is not good quality but simply because she isn’t too fussed about hauling wood and objects about, building structures and hammering nails into wood.  It probably didn’t help that she fell on a trunk and scraped her leg.

I asked my son afterwards what it was that he liked about the playground. What was his favourite part about going there?

“Parents aren’t allowed in the playground”, he replied.

By not letting parents go into the play area, it becomes the children’s space that they can define as they wish. They have the opportunity to interact and negotiate with children they don’t know.  They might use the materials they find in ways that adults hadn’t anticipated. And they get to make structures with material that they might not have at home.

We have quite a few specially built playgrounds in the Lower Mainland, and there are more in other parts of BC too.  The playground that has garnered the most attention is Terra Nova in Richmond. Some are natural playgrounds that feature a lot of wood beams, logs, natural materials and structures built into the landscape.   Others have elaborate climbing webs or long slides.

In 2017, the City of Delta put started two adventure playgrounds.  Here is how they described the goals of this type of playground:

“Unlike any other playground in Delta, the adventure playgrounds provide a space for children to engage in unstructured play and exploration of their surroundings. Children will have tools and materials to build their own play space and have the freedom to develop skills that will shape their entire lives: resilience, creativity, independence, problem-solving, and teamwork. They will build, create, use their imagination, be adventurous and active, and create a place that currently exists only in their imaginations—all while learning to assess risk.”

The pop-up playground in Coquitlam is a short walk from the end of the Evergreen Skytrain line.  If you live outside of the area and you’re looking for a new playground experience, this one could be a good option.  I should mention that there are lot of other activities that you can do in Central Coquitlam with your children.  Right across the road from the playground site, you can find a public swimming pool that has a slide and wave pool.

We decided to go to the  playground on a Tuesday, since it’s open until 6:30 pm on Tuesdays and Thursdays.  We parked our car nearby and walked into the area.   At the entrance of the playground there is a poster board that explains how the playground is set up.  It should be noted that this playground is like any playground.  It doesn’t represent free childcare.  If you wouldn’t leave your child at any other public playground and walk away to buy a coffee a few blocks away, you probably shouldn’t do that with this one either.  Some parents will have different standards for the older children. (The age range for this playground is from age 3 to 12.) The City has staff members who are stationed within the playground to keep an eye on things and to help out if the children need help.  (My daughter got her superficial scrape cleaned and bandaged up by one of the staff members.  Thanks!) 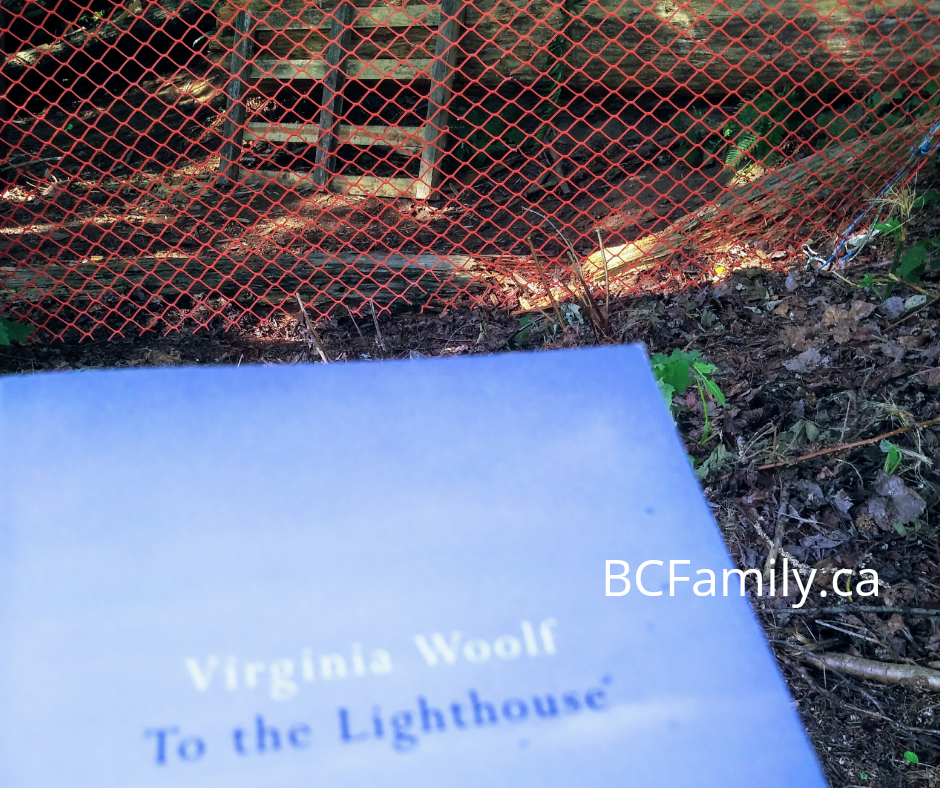 I came ready to hang out in the shade and read a book.  I brought a small, fold up chair and my copy of To the Lighthouse.*  I started the book months ago and decided this would  be the perfect opportunity to read in a shady, outdoor area.  Just south of the playground site there is an open area where there is a long log to sit on and grass where you can sit down or spread out a blanket. 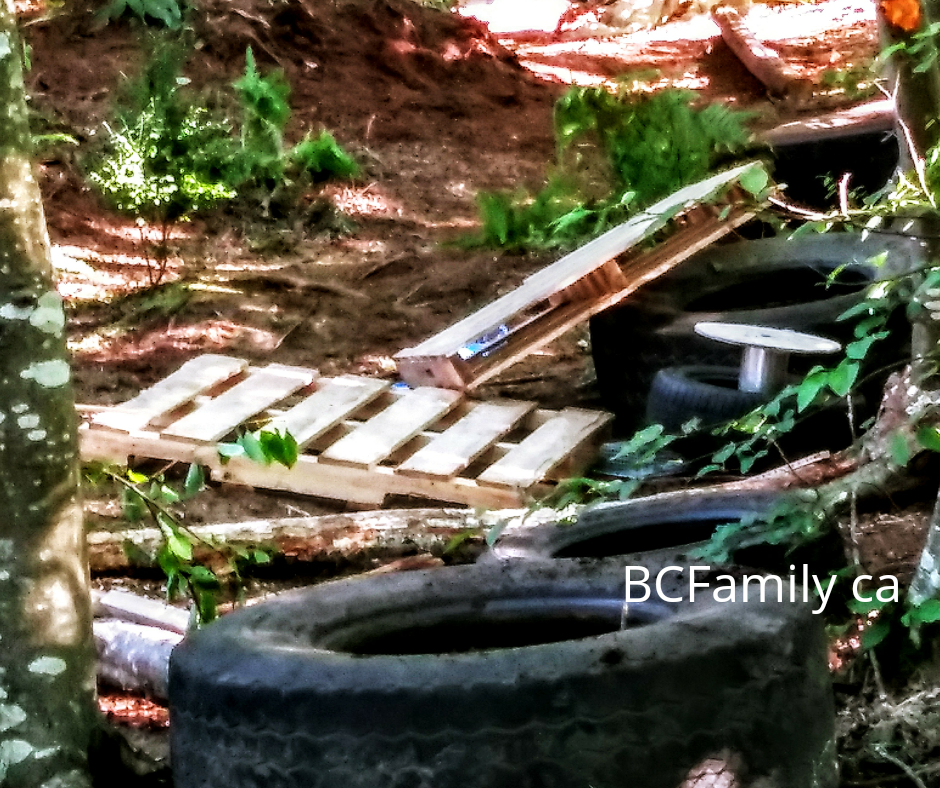 These items can be moved.  My son dragged tires and pieces of
wood from this area to the other side of the playground. 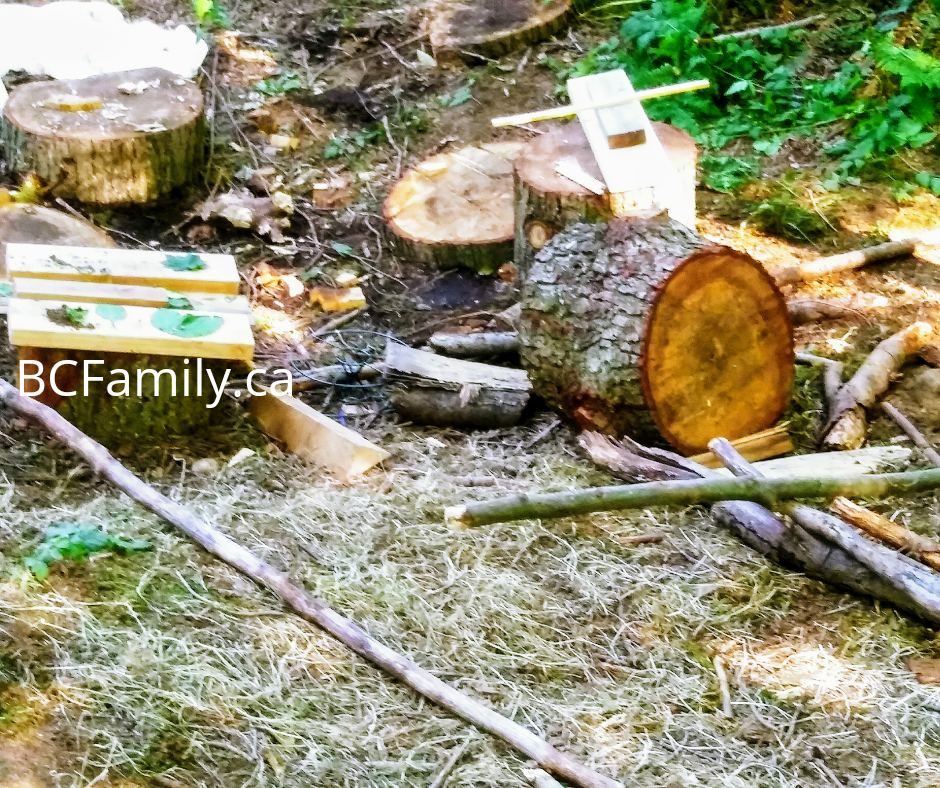 This area is just beyond the entrance to the playground.

In the playground, I could see that there were a lot of long, fallen trees.  I heard someone say that these fallen trees were on the site previously.  Pieces of lumber, both large and small; crates; cloth; hammers; buckets; tarp; cords; nails; and, random objects like the front of a car and wire baskets were available.  My children quickly got to work and started climbing on the logs, lugging pieces around and having at it with the hammer and nails.

After some time, my daughter declared that she was done.  She had slipped on a tree and scraped her knee, which didn’t help her level of enthusiasm. But she also admitted that this type of activity wasn’t quite her thing.  My son, on the other hand, was really focussed and enjoying himself.  I don’t think I’d ever realized how much he enjoys this type of unstructured building and play activity because I’d never seen him in this type of setting before. I wasn’t planning to take a photo of him in the playground – remember the whole “no parents thing” – but he made a request that I take a photograph of the car that he made. It involved a fair bit of hammering. 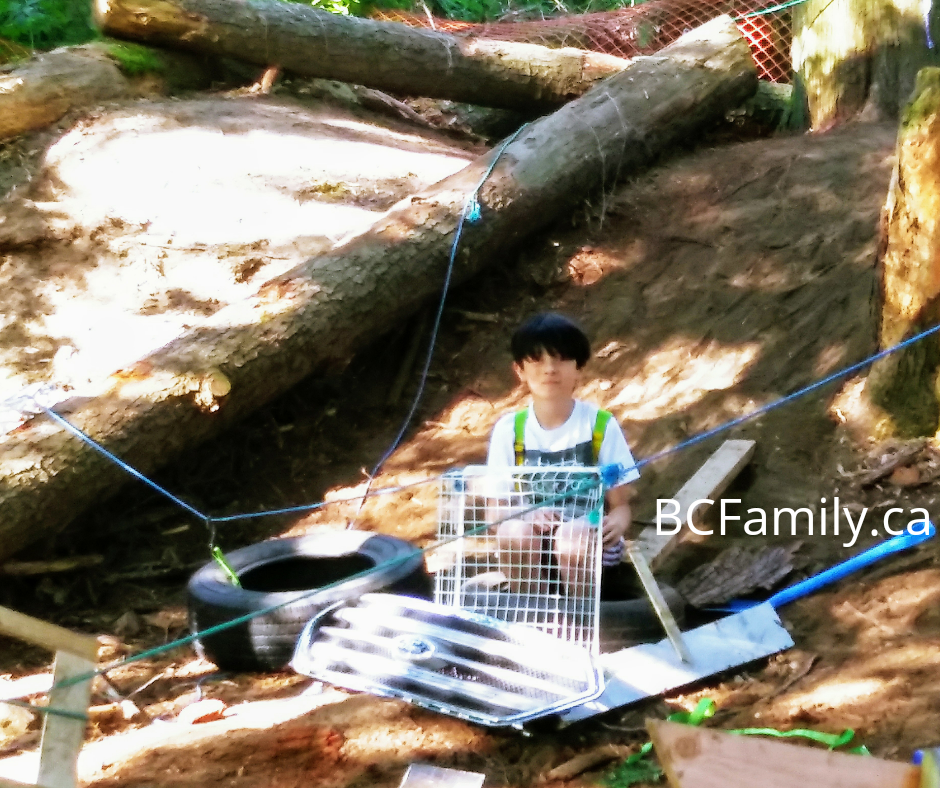 Other than this interaction, for the most part I tried  to not talk with my children too much over the fence and kept to myself, or spoke with other adults.  Eventually my daughter came out and sat with me. My son continued to play until close to the closing time. We were there for about two hours.

Even though it was a pretty hot day, it was pleasant and cool in the shade. My children didn’t need hats and – bonus – I didn’t even need to put sunscreen on them.

As we walked back to the car, my son and I talked about how it would be a nice idea to see if some of his friends might be interested to meet him at the playground one day.

If you haven’t seen photos of the  child constructed playgrounds of the 1950s and 1960s, you need to hit Google Image search. The photos are spectacular. For more current versions, head over to Instagram and type “adventure playgrounds” into the search field.  As a mid stream Generation Xer, I can’t say that I encountered this type of playground when I was a child.  The idea reminds me of an environment my father might have encountered in 1950s rural Portsmouth or Winnipeg, where he grew up.

These types of playgrounds have been around for decades but it does seem like the idea has been picking up steam in recent years.  I’d say that mid stream and younger Generation X parents and Generation Y parents who have younger children have more opportunities these days to read information online and share ideas on social media. In this way, they’re reminiscing about what they enjoyed about their childhood and realize that they want the same opportunities for their own children.

I’ve spoken with a number of parents who live in duplex and townhouse complexes that border green spaces. It’s not uncommon to hear that the children ramble about on their own while enjoying the outdoors.  This type of set-up is something to consider if you’re looking for that type of unstructured play environment for your children.

Here’s what you need to know about the playground:

The City of Coquitlam’s website gives more information about the design of the playground and the goals, and also gives tips about access and parking. 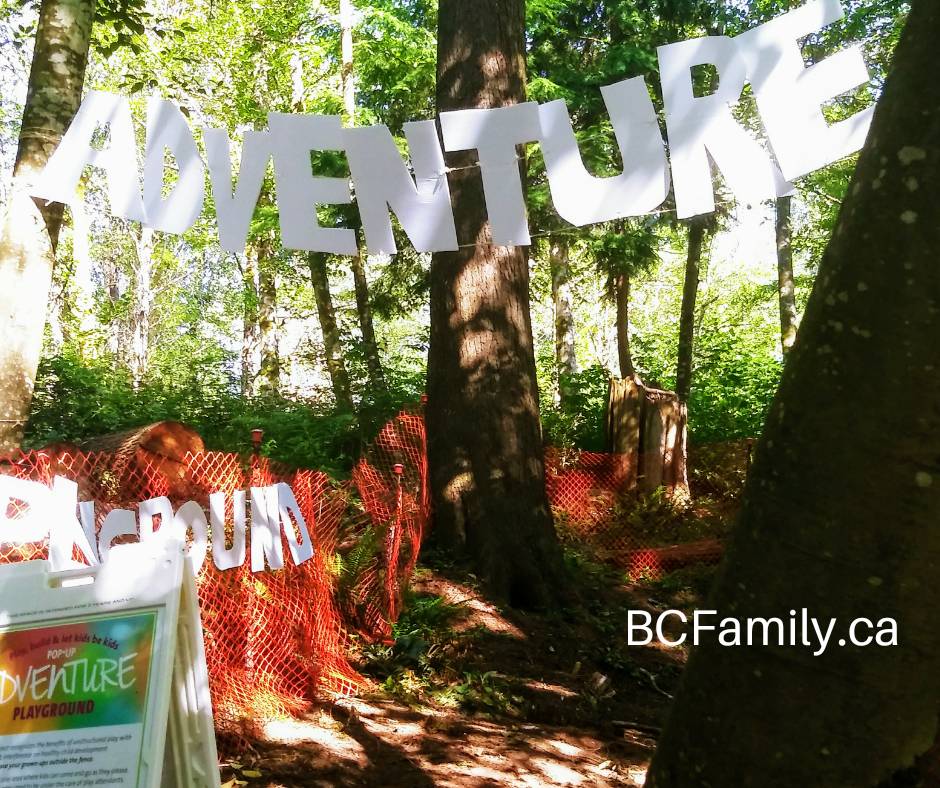 Accessibility: The ground is uneven and raised at the opening to the entryway.  The site isn’t really wheelchair friendly, although it might be possible to push a wheelchair into the front end of the playground where there are supplies that are available. If you have a younger child in a stroller, you can easily drop off your older child at the entrance and use the sidewalk to walk over to the grassy area on the south side.

Have you been to this adventure playground in Coquitlam or to another one in BC or elsewhere?  You can comment about this posting on the BC Family Facebook page. Your contribution matters so don’t be shy! 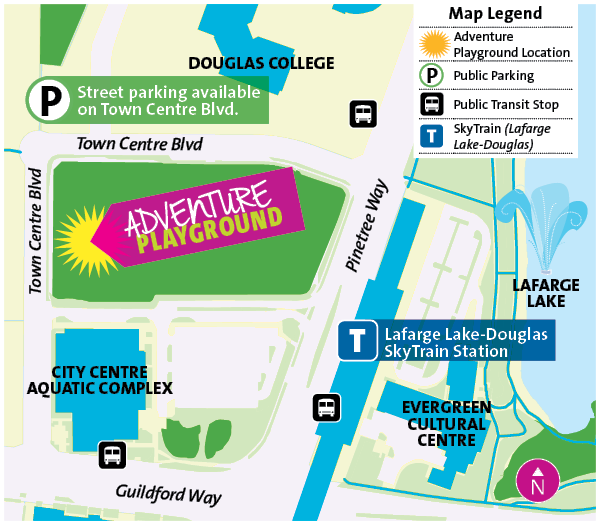 * Affiliate link.  Book Warehouse provides fast and free shipping around the world. We love it!