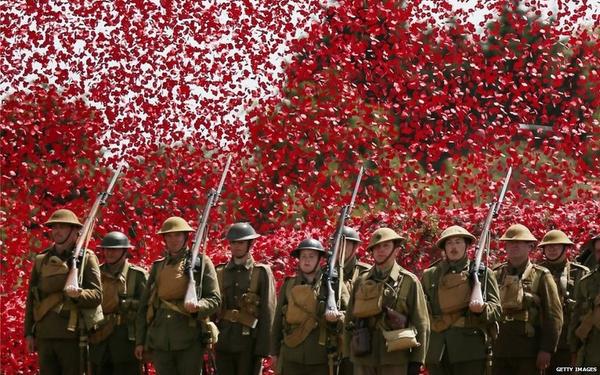 As we mark the start of WW1 today – one hundred years ago – this war could seem to be one that is slipping into our collective distant memories.  For my family, at least, it is a conflict that plays a central role in our family’s personal history.

My father’s father got married and started his large family of six children when he was his 30s.  He had spent the first decade of his adult life traveling the world while working as a merchant marine.  My father was the second youngest and was born when his father was in his early 40s.  As a non Boomer Gen-Xer, this means that I have the unique privilege of being closely related to a WW1 veteran.

In 1915, when my British born grandfather was 15, he enlisted in WW1 by reporting that he was 19 years old.  He managed to do this by giving the officials the family name of his stepfather.  Since they couldn’t find a record of his birth, they accepted the information that he gave. (From that day forward my grandfather used the surname of his step-father without officially changing his name.).  His war records show that he joined the 5th Division “the Buffs” East Kent Regiment and was sent to Basra, Iraq*.  (Decades later my father and our family moved to Baghdad, which is north of Basra.) He later described the warfare – including the trenches – to my father as being like hell. (See 6 minute mark in video clip below.) My grandfather was seriously wounded, got malaria and was at one point blinded.  He was then evacuated to Egypt for recovery. I always picture the recovery scene from the movie the English Patient (at 25 sec.) when I imagine what this must have been like for my grandfather.  It was at this point that his mother caught up with his whereabouts and informed the war office that he was under age and should be sent home.

Related: Other footage from Basra during WW1

The war had a deep and permanent impact on the life of my grandfather and his health.  Soldiers from both world wars not only suffered physically from their injuries but also from post-traumatic stress challenges.

My Great-Grandfather on the other side of my family went to the front lines from his home in what is now Poland, working as a tailor.  His family belonged to an ethnic group of Germans who had lived in the region for a few hundred years.  When the war broke out, the ethnic Germans in his village were put in train box cars and sent to Siberia.   My grandfather’s two brothers – preschool aged twins – died enroute. It was a harsh journey for the family. My Great-Aunt has described how they ate the potato peels that soldiers gave them.  Her pillow in the box car where they slept froze at night.  When the train reached the end of the line the box cars were left in the countryside.  Four years later my Great-Grandfather left the war and went out to Siberia to find them.  They were still in Siberia in 1919 when my grandfather was born and it took them two years to return to their village in Poland.  The sight of soldiers shooting each other in the streets during the civil conflict and hungry people dying on the streets made a permanent impression on the family.  What they saw was the reverse of the story laid out in Dreams of My Russian Summer**.  You can read about the legacy of this experience and how it impacted the life of my Great-Aunt Hanna here. 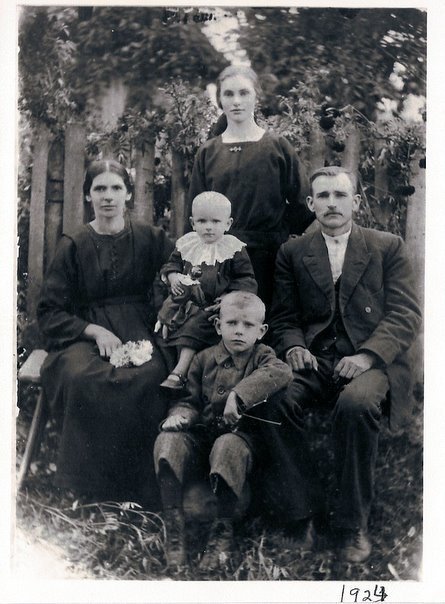 My Great-Grandfather, grandfather (front centre) and
their family four years after they returned to Poland from Siberia.

By happy fortune and blessings, I was born in Canada and haven’t had to experience the type of military conflict that you now see in places such as Iraq and Gaza.  The closest my family came to this type of experience was the day my father narrowly avoided being on site when a bomb exploded on the high street near where we lived.  For many years after that, a member of my family suffered from post traumatic stress related anxiety.  The net result of the latter probably bred a tendency in myself to be overly cautious and protective.

My family lived in Ottawa “off and on”, when I was a school girl, as my a parents worked for the foreign service.  One summer, while I was working downtown between semesters at university, I decided to go into the war museum.  It was a quiet afternoon and, as it turned out, I was the only person on the floor.  I approached a portion of the exhibition that I had, in the past, found to be particularly interesting.  I walked up a short ramp, made a turn and found myself in a position looking over a trench wall and onto the battle field.  This area is darkened and sheltered from the rest of the exhibits.  Loud battle field noises and firing of guns could be heard.  For some reason that day the experience felt very real to me. I had the feeling of what it must have been like to be in a trench with the prospect of having to go over the wall at that moment.  I panicked and ran out of the installation, down a short ramp, and came face to face with a mannequin dressed as a soldier.  This only made my experience all the more nerve wracking.

In a small way these types of historic displays remind us of the horror of war as it is experienced by the men and women in the field, on the air and in the sea.  I once had the opportunity to sit around the kitchen table of a WWII veteran in Victoria while his friend explained that he was once in a corvette convoy on the Atlantic ocean.  A U-boat sank his ship and he was thrown in the water.  Years later he and the captain of this Uboat befriended each other.  It was a memorable and inspiring end to a dramatic story.

My grandfather was not deployed during the WWII but played a significant role in Winnipeg supporting former prisoners of war.  It is WWI that stands out as the war that affected our family the most and for that reason it is one that I will never forget.  When my children are old enough to watch the documentaries and read the accounts, I will help them to understand the reality of my grandfather’s experience as well – to the extent that we can appreciate what the veterans and the fallen experienced.

WWI Through the Eyes of a Teenage Boy

*  My sibling has had considerable success looking up family history via sites such as Ancestory.com.  He seems to have a talent in this regard.  I should try to convince him to do a posting about ways that you can research your family histroy online.