Results from the 2009 Provincial Election show that almost half of the eligible voters in British Columbia (49%) and over 500,000 British Columbians under the age of 34 didn’t vote.  This is almost identical to recent results in provincial elections in Iraq where a little over 50% of the population voted.  Iraqis are deeply disillusioned about the political process and corruption.  Voter turnout has plummeted since 2009 when, compared to British Columbia’s low turnout, 72% of Iraqis voted.  There have been eight elections in Iraq since 2003.  During elections it has been a common occurrence to see bombings that kill citizens.  In the most intense period of violence in the mid 2000s, the voter turnout was well over 60%.  Citizens  literally put their lives at risk in order to exercise their democratic right to vote.

Looking beyond the reasons why citizens are disengaged from the political process in British Columbia, there is also the added concern that some sectors of our society are more prone to low voter turnout.  The results published in the recent Canadian census – now voluntary – indicate that there was a low participation rate in the new immigrant, aboriginal, senior citizen and at-risk women communities. These are the people whose voices need to be heard the most.  Different political parties form governments that can have a strong impact on how the Canadian social contract is protected, strengthened or eroded.

What would have happened if the 49% of British Columbians who didn’t vote had actually voted in 2009?  If most of them had voted for the NDP, we would have a different government today.  If more people who support the Green Party’s platform registered their vote, British Columbians might be more amenable to voting Green based on a healthy result in 2009.  Journalists often track the rising popularity of a party based on previous election results.  If you vote for a candidate that isn’t successful, your vote still makes a statement and helps to influence subsequent voting patterns.  Members of the BC media have been telling British Columbians for months that they will be voting NDP.  When British Columbians vote this month they will show that journalists were right – or that they were wrong.

Most of us have a good idea about the political vision that we prefer.  Political parties like to believe that in addition to swing voters, there are a good number of people who can be swayed to vote differently after watching a political ad or seeing an All Candidate debate. We often hear that allegiance to one party can be easily shifted to another.    Are the BC Liberal party and the BC NDP party that similar? 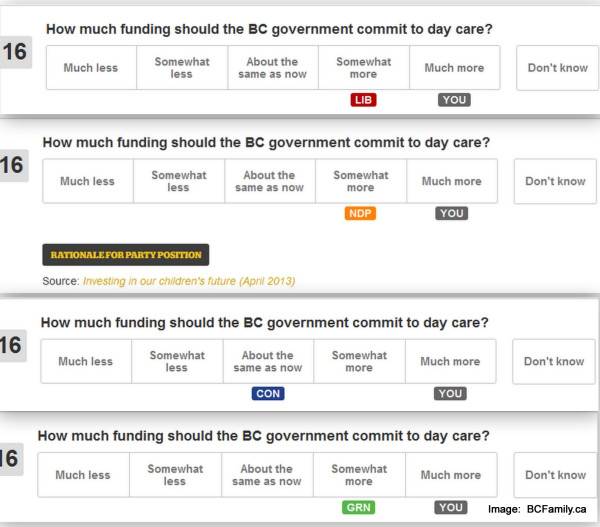 The British Columbian version of the Vote Compass survey will help identify where voters fall on the political spectrum.  If a result comes out a little bit different than expected, check out answers against all of the answers for each political party.  This will help to understand how a final result came together.  The range of topics covered in the survey will also give an overview of some of the hot topics being discussed in this election.

In the days leading up to the election we can encourage friends, family and colleagues to vote.  We can encourage them to take the Vote Compass test as well.  If you are on the fence about voting  on May 14th, consider that Advance Voting for the 40th Provincial Election will take place from May 8 to May 11th, 2013.   Polls will be closed on May 12th and 13th. Advance voting is a convenient option for people who don’t want to line up later in the day on the 14th.

Start the conversation now. Encourage others to rock the vote.  The polls open at 8 AM on May 8th and close at 8 PM.

Rock the Vote BC video ad about the election (focussed on University and College students).

What to expect when you vote. (Video for first time voters.)

Find out where to vote.

A social contract for the 21st century.

American video encouraging you to get out and vote: