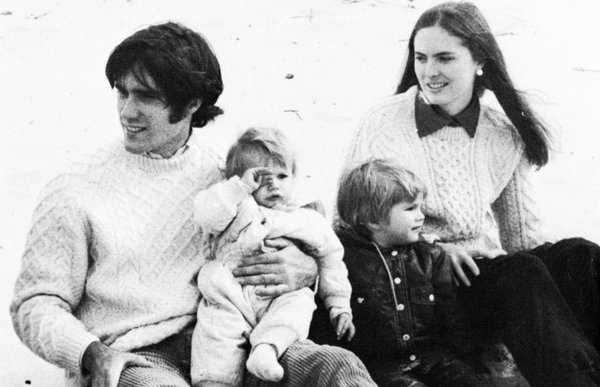 It is a story that pulled ahead of the pack in the bleary hours of early morning news.  Hilary Rosen, a consultant to the Democrats and CNN commentator, has called out Mitt Romney and his wife for comments they have made about women and the economy.  While speaking with Anderson Cooper on CNN, Rosen suggested that Romney hasn’t “worked a day in her life”.  In the Twitterverse and blogosphere all buttons pointing to mothers, their participation in the workforce and access to affordable childcare are fully engaged.  Stay-at-home-dads have also been pulled into the conversation.

Ann Romney responded by sharing her opinion about Stay-at-Home Moms on her new (and verified) Twitter account:

I made a choice to stay home and raise five boys. Believe me, it was hard work.

Romney explained that her “career choice was to be a mother and [she thinks] all of us need to know that we need to respect choices that women make.” Hilary Rosen also shared her response to Romney on Twitter:

@AnnDRomney I am raising children too. But most young American women HAVE to BOTH earn a living AND raise children. You know that don’t u? — Hilary Rosen (@hilaryr) April 12, 2012

In a discussion with Anderson Cooper on CNN, Rosen agreed with the Romney’s belief that women are more focussed on economic issues related to their families than they are on other topics.  Similarly, Canadian election-related research shows that women are most attuned to political messages that focus on social welfare and issues that affect the economic reality of their family life.

In OECD assessments, the United States and Canada provide some of the poorest early childhood education and care offerings.  Parental leave rights in the United States are a fraction of the 12 months provided in Canada. On this topic, feminist author Jessica Valenti  joined the conversation on Twitter:

Since @mittromney & @AnnDRomney value women’s domestic work so much, when will they discuss their plan for national paid parental leave?

The developing story related to this exchange highlights the divide between Republican and Democrat priorities that is also seen in Canada. The Conservative Party of Canada (CPC) prefers to provide Canadian families with cash in hand that they can use to either pay for daycare or raise children at home.  Unfortunately the amount provided barely makes a dent in the costs that families in British Columbia encounter, for example, when they need to use daycare.  British Columbians and Canadians in other provinces (excluding Quebec) cannot find daycare even if they CAN afford the fees.  Wait-lists for high quality programmes can be three years long. (Two years too long for mothers in the workforce.) In contrast to the priorities of the CPC, the NDP, Green Patry and Liberal Party of Canada political parties are focussed on developing a national early childhood education and care programme. Provisions for parental leave in the United States are less than half of what is provided in Canada.  Women cobble together a few weeks leave by adding in vacation time as well. For most women, financial needs dictate that they will return to work. “The United States of America, for example, is the only OECD country without a national paid parental leave policy, although some states do provide leave payments. Available parental leave is short (12 weeks), and only covers some employees (those in companies with 50+ workers). While making changes will involve a cost to employers, there will be benefits not only to child well-being but also the labour market, as evidence suggests that when US mothers take their full leave entitlement, they are more likely to return to work than mothers who do not.” (OECD, Better Life Index)   Of 173 countries surveyed, the United States of America, Lesotho, Liberia, Papua New Guinea and Swaziland are the only countries were there is no national law requiring paid time off for new parents. Hilary Rosen also suggested that Ann Romney has not “dealt with the kinds of economic issues that a majority of women in [the United States] are facing in terms of how do [they] feed [their] kids? How do [they] send them to school and why do [they] worry about their future?”  Rosen’s comments speak more to a critique of an affluent, privileged woman than a woman who is the average stay-at-home mom.  Most stay-at-home moms in the United States live on modest one household incomes – or income assistance – and have financial concerns similar to those of mothers in the workforce.

Why is it controversial to say that incredibly rich, elite Ann Romney prolly doesnt understand the economic concerns of most American women? — Jessica Valenti (@JessicaValenti) April 12, 2012

The issues raised by the Romneys, Hilary Rosen and their supporters bring forward many questions:

How do we define a woman’s work? (See related NYTimes piece.)

Why do women choose to stay at home with their children?

Are some mothers at home full-time due to specific lifestyle choices such as religion, intellectual beliefs, homesteading or living off the grid, for example?

Are some women’s choices related to the availability, cost and/or quality of childcare?

Are some women staying at home when they would rather, if they could, be in the workforce? (See similar issue in the UK.)

What contributions do stay-at-home-mothers make to the quality of life of their families and, in an unpaid capacity, through their contributions to society?

Are some women, as Facebook executive Sheryl Sandberg repeatedly points out, choosing to mentally check out and “leave before their leave” when they could and should be planning a return to work, post pregnancy?  Are women who stay at home with their children avoiding or escaping from jobs that are not, as Sandberg suggests, “compelling”?

For women who do want to be in the workforce, what quality of childcare will they encounter in their communities?  Are the programmes that are provided stimulating and nurturing for children?

What choices do single mothers – especially those with limited or no extra financial support – have when it comes to raising their children, working and childcare?

How do the provisions for high quality and accessible childcare in states and provinces compare to those in countries such as Finland and Sweden?

How can we encourage the development of government policies that support both women in the workforce and women who choose to stay at home full or part time with their children?

How can we encourage respectful dialogue about the diverse life and career choices that women make rather than focusing on ideas promoted by partisan politics?

What effect do short or long term parental leaves have on a woman’s career, her earning potential and her pension?

How do members of the media keep a spotlight on the needs of children and families in their communities and countries?

Do members of the media focus on the key topics or are they distracted by trending, and not necessarily typical topics such as Tiger Moms?

How do politicians stay abreast of the challenges that their constituents are facing?

Are politicians in the United States and Canada following public discourse about these topics in the media  – including their own media? (Prime Minister Stephen Harper, for example, admits that he does not follow the Canadian news.)

How are individual citizens sharing information about their experiences in public spaces such as social media?

The issues this media moment raises are important topics that will not necessarily be addressed adequately during presidential and federal election campaigns. Members of the media will pick up the story today and drop it again the day after tomorrow.  It is left to women and their partners to speak up and share their stories on their websites, blogs, Twitter accounts, Facebook pages and in their personal and professional conversations.

What is your story? Why did you decide to stay at home full-time with your children, or work full or part time?  What quality of childcare have you accessed?  Was it difficult to secure a space? What are your thoughts about the cost, availability and quality of childcare programmes?  If you could make changes, would you? How have your decisions related to childcare affected your career path, promotion opportunities and pension?

Why we still have the Stay -at-Home Mom debate (There are 902 comments and counting!)

Women short-changed in retirement economy for generation raising their children

Leverage Lessons Learned [Being at Home Full-Time With Your Children]

Is Canada a Case of Gender Re-Alignment?

What a Stay-At-Home Mum’s Salary Should Be Worth.

Image: Ann Romney with her children and grandchildren