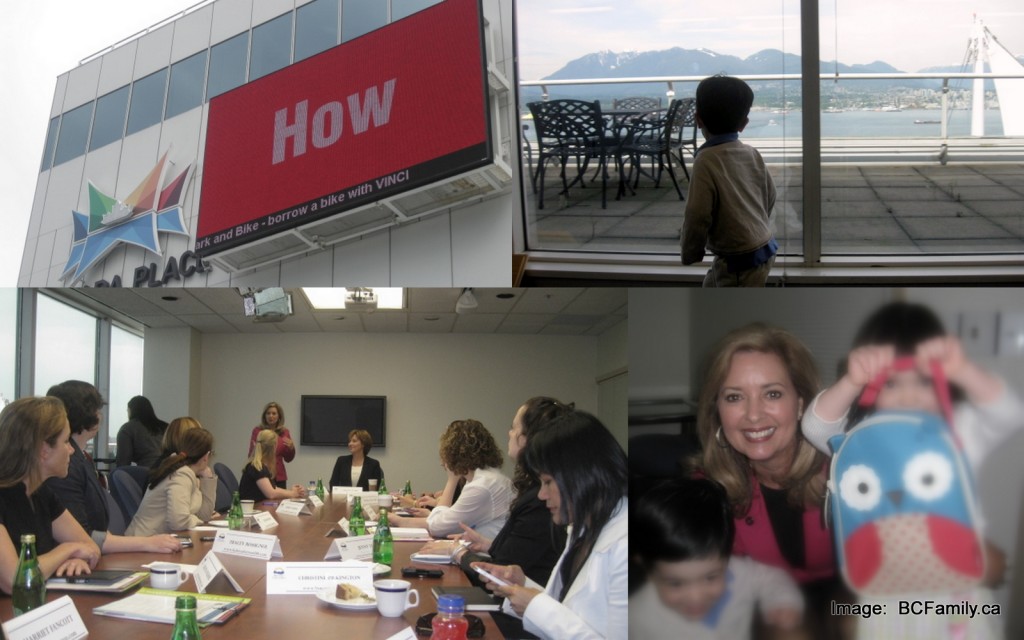 A year ago I was invited to attend a meeting at Premier Clark’s office along with 16 other women who publish online content.   Many of the women had been nominated in the online community to be Top Mom Bloggers in Vancouver.  I knew that the meeting would touch on topics important to parents, mothers and women, and was pleased to have the opportunity to attend the event.  My mother-in-law was kind enough to help look after my 2 1/2 year old twins in an adjacent office space within the Premier’s office while I sat in on the meeting.

In the days leading up to the meeting, I spoke with parents and reached out via social media to hear what information community members would like me to pass on to the Premier and her colleagues.  Some people I know reacted with muffled amusement when they heard that I would meet with the Premier.  Although it hardly seems fair, there is a sport in BC called “crack jokes about Christy Clark and Adrian Dix”.  You could imagine the type of “how naive she is” thoughts that were racing through their minds.  Detractors will counter that the meeting was a PR ploy to encourage women like me to champion the work of the Premier and her colleagues. I saw the event primarily as an opportunity to bring the message of British Columbians to the table.  Based on conversations around the table, the other invitees felt the same way.  Many of the women who attended this meeting, and subsequent meetings, will vote for the NDP in the 2013 election.  In this meeting the Premier wasn’t preaching to the choir.

During the meeting I had the opportunity to raise the concerns of other people who couldn’t be there, including dads.  I heard the Premier’s response.  I replied  – not always agreeing with the Premier’s perspectives.  We had an intelligent and respectful exchange.  I felt that I was heard and was able to look at how the issues we discussed came up in the weeks that followed.  One of the topics I raised was referenced by the Premier when she discussed the meeting on Twitter.  I discussed specific concerns families had mentioned regarding the Port Mann bridge, and the needs that outlying cities with growing populations face to provide services for children with special needs. (EG mental health or speech language services.)

Since this meeting I have been invited to a few events organized by the Premier’s office. Most recently I was invited to meet with one of the Premier’s colleagues whose portfolio focusses on topics related to my professional training. Due to childcare constraints I have not been able to attend any other events. 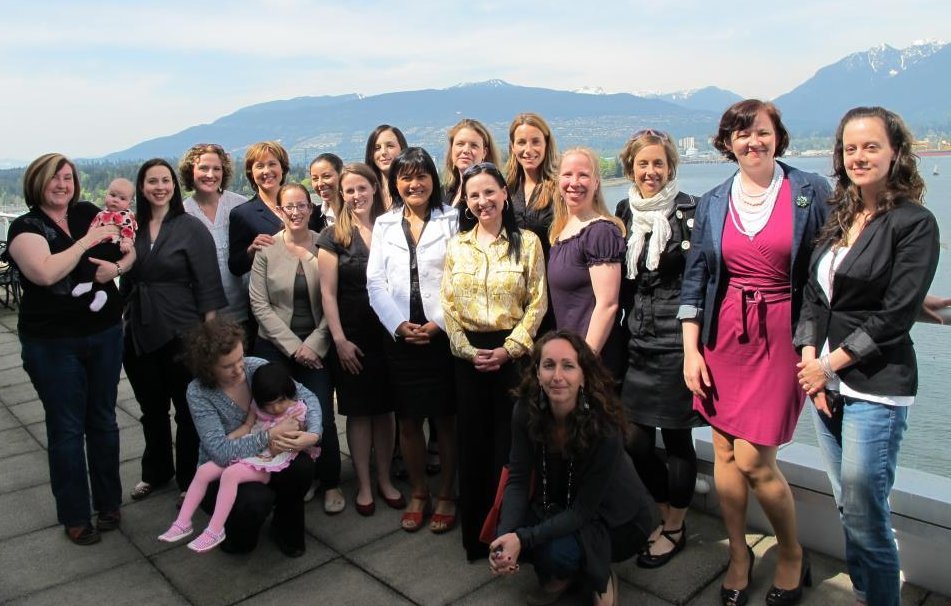 In the months that have followed since the meeting in 2012, I have often thought about these opportunities and have noted some of the conversations that have taken place in the print media and online.

* Both men and women have concerns about their children. Mothers have concerns that reflect a woman’s role as mother and also as an employee who works outside of the home part-time or full-time.   Childcare concerns affect children and families but have a unique impact on a woman’s options for her career and her pension.

* I was invited by a colleague of the Premier to attend an event downtown as an observer. It was made clear to me that I would not be sitting in the main meeting room. Instead I would be in a smaller, secondary room and would have the opportunity to follow the event and share information about it online.  It is common nowadays to have a group of social media publishers at events who are not paid journalists.  You wouldn’t think that this would be a controversial invitation. Months later the guest list for this event was shared online.  The inclusion of details regarding the invitation of “mommy bloggers” was meant to be a critique, not a statement of fact.  One commentator on Twitter wrote that mommy bloggers are hardly experts.  I confirmed that my name should have been on the guest list too but I declined early on.  I explained that the terms of the invitation were different from what was being portrayed.  I received no response.  Its seems that it’s easy to put a spin on something but doing the right thing and correcting misinformation is not considered necessary.

* In the meeting I noted that the invitees came from a variety of professional backgrounds. Some worked at home full time while others worked outside of the home full time. One woman spoke about how her blog focusses on children with a specific special need.  Another woman brought up the need to support women in social media and entrepreneurial jobs in a manner similar to what is being done in Ontario.  She explained how it made more sense for her to run her business in Ontario than it did in British Columbia.  There was a discussion about the need to support entrepreneurs and the training of women seeking to enter/re-enter the workforce. Other women gave pointed examples of how the cost of living and cost of childcare is prohibitive in BC.  One woman shared how she had to keep her child in a daycare for six months, even though she didn’t feel fully confident that the quality of the centre was acceptable.  She ultimately made changes to her professional life in order to take her child out of this daycare. There was also a discussion about women working in specific professions where there has been a notable exodus from the profession, post birth of a baby.

* My attendance at this meeting gave me an opportunity to meet women I had only connected with online.  Contrary to what is shared in the mainstream media and online, moms who write online do address topics that aren’t blog-lite.

The message I received before and after the meeting with the Premier was that for various reasons I shouldn’t have talked with Christy Clark.  Other than the invitations from the Premier’s office, I haven’t had the opportunity to cross paths with any BC Liberal OR NDP politician.  During the run-up to the 2013 election, no volunteers or candidates visited my neighbourhood or called my household. The next time I am invited to shared my concerns and those of the people I hear from in the community with a politician, and assuming I can attend, I will accept.

“The aim of the event was to connect local moms to the Premier, so that she could hear what’s on our minds. It’s not every day you’re invited to meet with a Premier. As we said, we couldn’t pass up the chance to ask our questions, share our concerns, and propose some ideas for how the government could make our lives better. ” Excerpt from Round Table With Premier Christy Clark

“I am not what you would call a Christy Clark supporter (although I’m not a supporter of any other party leaders in my province, either). On the two occasions I’ve met her, I did that mental calculation, and decided that I would accept the bargain that comes with any PR pitch. The opportunity outweighed the downside. I understand that some people may attribute certain political leanings. While that’s not the case, I can accept that. I am willing to own my decisions. But I think it’s interesting how the PR ploy (which it surely is) is pointed out when there’s a politician involved, while no one called PR ploy on my free ferry passage to Victoria earlier this month to cover an exhibit at the Royal BC Museum.” Excerpt from Public Relations, Premier Christy Clark and Me

“The people I have met through blogging have helped me create new ways to form my own business that works around my family. Many other women have gone much further than I and are in the middle of amazing digital media empires and or fantastic writing careers.” Excerpt from Mommy Bloggers Are Working Women Too

“Not being a huge Liberal supporter, I was wondering what the atmosphere would be like…how much of a ‘please vote for me’ atmosphere this meeting would have. I was totally wrong. Christy and Pamela were cordial and quiet. They listened, offered feedback, asked questions, and were pretty honest in my opinion. […] What we had at that table represented the variety of women who happen to be mom’s who happen to love the internet in all their glorious diversity.” Excerpt from Speaking Our Minds

“Clicking through the site is even more revealing… the Blogroll is a collection of banana bread, granola friendly fashionable motherhood sites to foodie hangouts, to arts and crafts and more…. […]  I happen to be a mother, and in no way am I attempting to disparage any of the mommy sites* ( or others) that the government site links to.   They aren’t my ‘thing’ but I do recognize many mothers, particularly new moms, gravitate towards these sites  to connect with other moms, find tips, recipes, etc… ” Excerpt from  Clark tries new tactic to woo women back into the fold with Über-mommy friendly website – paid for with your tax dollars. * BCFamily.ca is a link on the website mentioned in this piece. Apologies for not providing enough tips!

A response to the previous piece.

“So, are mom bloggers exercising political power? As it turns out, they don’t blog about much that you’d call political.* They’re generally not endorsing candidates or advocating for legislation. Instead, their topics are often mundane — recipes, shopping, cute things the kids did, pets, frustrations — and also personal: depression, sex, drinking, rage, boredom, self-doubt.” Excerpt from  Michaud: Can Mommy bloggers harness their political power? *See example from BCFamily.ca – a typical site geared towards family-focussed individuals.