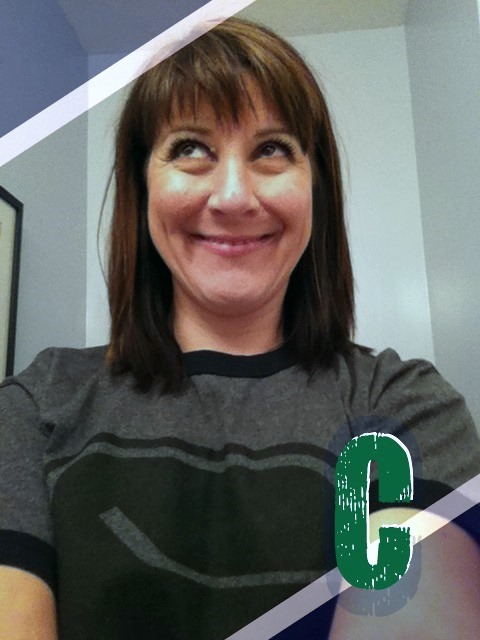 The Stanley Cup Finals 2011 are in their final days as Vancouver gets set to play Boston for game seven in Vancouver. Contrary to what the local Milestone radio commercials suggest, there is a large contingent of serious female hockey fans in British Columbia who won’t be going out for a non-hockey related Girl’s Night Out when a game is on.  As the season wraps up for another year, it’s the perfect time to hear from long-time hockey fan Kim W. about hockey traditions in her home and how she celebrates.   Kim is currently a new student in a programme that will help her to start a new career.  She is a happy wife to Sean and sells her own line of chiyogami, washi, metal and resin products online at Never Stop Shopping.

I grew up in a hockey household as my Dad was a very animated and avid fan! He would shout and cheer at the TV and it would sometime startle me as he would be so loud! I used to ask Dad, “you do realize they can’t hear you, right?!” There was one time when I asked if we could watch something else on TV and my Dad replied “not a chance”. I said “but I am bored of hockey”. His response (jokingly of course) was “love hockey or you can move out kiddo!”. I was eight! I have loved the Canucks since the days of Smyl, Tiger Williams, Sundstrom, Lupl  Hanlon – when Don Cherry didn’t wear bizarre suit jackets!!

I then married a hockey loving guy who also yells at the TV and I tease him too that they cannot hear him! We are definitely a hockey household, whether it be playoff time or not.

When it comes to hockey, there are is a group of us fans who love the game (and we are very loud!!).  There are also those that jump on the bandwagon when it is rolling by, those that like to poke fun at us hockey lovin’ types and those that are aware of a game called hockey. 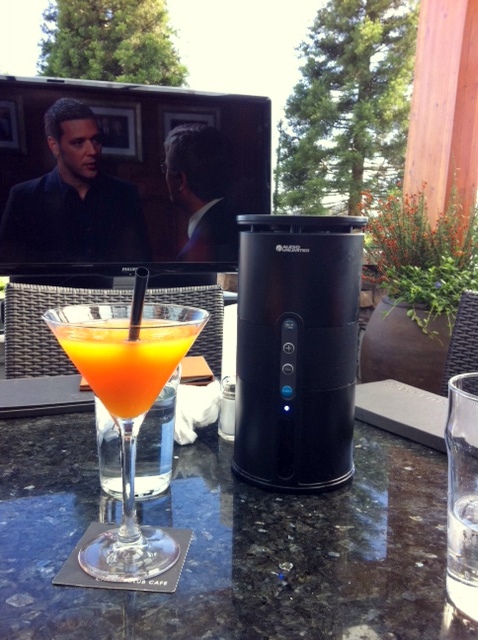 Enjoying a Bellini on a restaurant patio while watching George Stromboulopoulos interview Prime Minister Harper about hockey and the playoffs. Guests are provided with speakers so that they can hear the game.

When it comes to entertaining during hockey games, we are experimenting by doing a bit of everything.  Games are enjoyed at home and friends will come over.  Food and drink is a must. A  small group of us will go to a pub or patio that is showing the game and get swept up in the group excitement! For the away games we went to Rogers Arena and shared the excitement with fellow fans! We watched all the Canuck/San Jose games in Vegas with fellow Canadians. It was exhilarating!

For food during the games – ah yes the munchies – we serve a lot of different types of “appies”.  It is not exactly the most healthy menu, but everything in moderation! Ha ha – and hey! It’s a Celebration! Go Canucks Go!!

For game one we served a spinach and artichoke dip, a 5 layer fiesta dip, vegetable samosas, a cheese and pepperoni plate, puff pastry and cheese triangles, veggie plate, and salsa and chips from the fabulous Las Margaritas in Kitsilano. 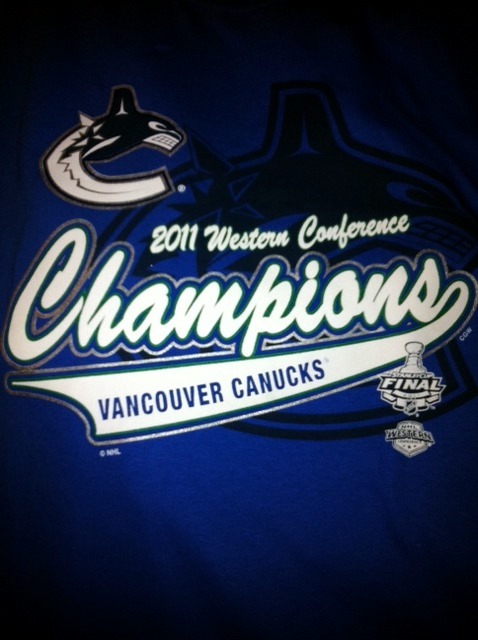 Place garlic in a small baking dish. Bake in the preheated oven 20 to 30 minutes, until soft. Remove from heat. When cool enough to touch, squeeze softened garlic from skins.

Cover and bake in the preheated oven 30 minutes, or until cheeses are melted and bubbly. Serve warm.

Mix the sour cream, cream cheese and taco mix in a small bowl.  Spread over the base of a  large glass serving bowl.  (Some people use a broad and shallow dish, while others use a narrower, but deep, dish.  It is ideal if you can see the layers through the side of the dish.

Add one layer of salsa, shredded cheese, and guacamole respectively, and top with one layer consisting of diced, fresh tomatoes, green onions and olives.  You will end up with five layers in total.

Serve with tortilla chips, pita chips, a favourite vegetable such as celery or cucumber.

Note:  This is a vegetarian version that does not include meat and also does not feature refried beans in the first base layer.  You can add ground meat mixed with taco seasoning in between the sour cream and salsa layers. If you like lettuce, you can add shredded lettuce on top fo the guacamole, before adding the final layer of chopped vegetables.  If you wish you can bake the mixture at 350 degrees F for 20 minutes to melt the cheese.

Kim buys pre-made appetizers, as she is too busy to make them from scratch, and has good success with the product line at M & Ms. She purchases chips and fresh salsa from Las Margaritas in Kitsilano as theirs are the best. 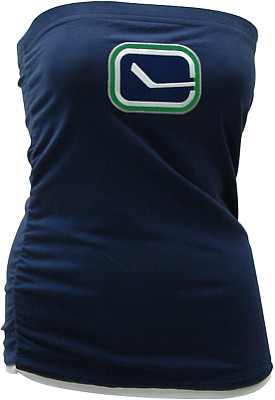 Kim is hoping to find her own Western Conference 2011 Champions top, like the one her husband owns.   The Vancouver Canucks clothing for women has a well earned reputation for being some of the hottest NHL attire for women.  Contrary to what Bruins fans have been saying lately, Canucks apparel is not the ugliest in the league. In particular when female fans are wearing their clothes!

You can purchase Canucks clothing for women, such as the tube top shown above, online.

At Dahlia Drive in North Vancouver you can purchase Canucks slip dresses (via online orders) starting at $150.  The fabric is sheer, so they recommend wearing them with leggings. You can learn more about their sustainable approach to fashion design by watching an interview on the Urban Rush TV show.