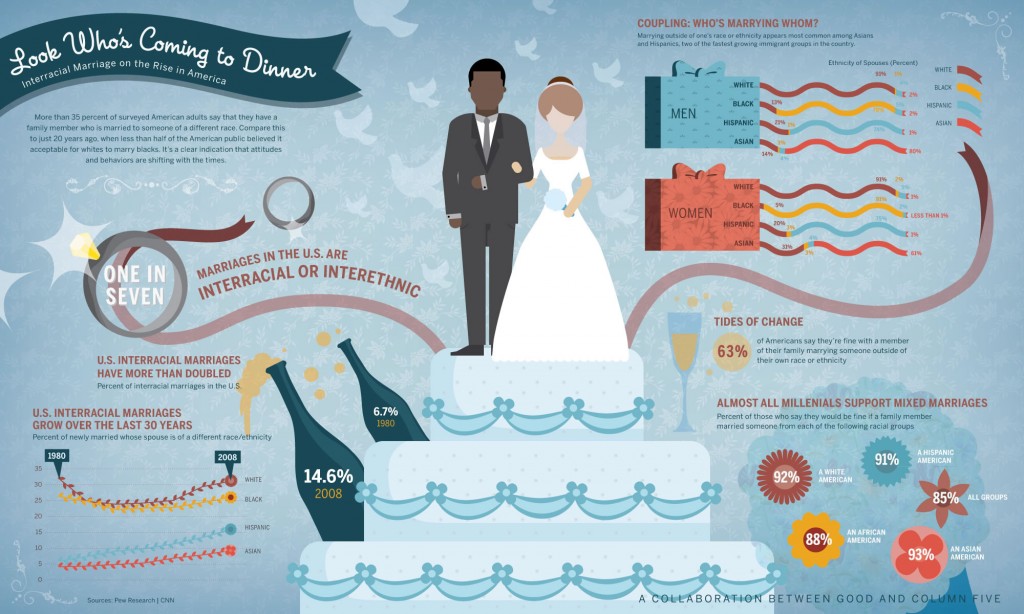 My husband and I are not from the same ethnic background.  This is not really an earth shattering fact, as the expression goes. Our children, therefore, are Eurasian – not exclusively from a European/Caucasian or Asian ethnic background.  On the Pacific coast of Canada this is not an unusual circumstance.  Walk around any shopping mall or visit any public school and you will find many couples who are from a mixed background picking up their children. In the 2006 Canadian census 3.9% of marriages in Canada involved a marriage with partners from two distinct ethnic backgrounds, one of which is a visible minority. This accounts for almost 290,000 Canadians. Of this amount 9.5%  involved one partner who was of Chinese-Canadian heritage: 11% of Chinese-Canadian women were in mixed marriage compared with 8% of men. The number of mixed marriages increased by over 30% in five years.

Not long ago, while sitting with my two children, a woman asked me if I was the caregiver of my children.  “No, they’re mine”. I responded. “Oh.  You adopted them from China?”, she immediately asked in reply. “No. My husband is Chinese-Canadian.”  She paused for a moment to register what I was telling her.  Another woman nearby explained that her grandchild, sitting next to my children, also had a mum who is not Chinese-Canadian, while her son-in-law is Chinese-Canadian.

No, I am not my children’s nanny. It’s not the first time I’ve been asked this question.  I realize that with my dark blonde hair I don’t look like the mum of my children, who have black/dark brown hair.  I am, however, a mum who lives in a household that embraces the ethnic heritage of two continents. My husband’s family came to Canada from Hong Kong and lived in China in the early 20th century.  My family’s background is English, Irish, Scottish, French, Ukrainian, displaced German and Russian. I also grew up in a diplomat’s family in various countries around the world, including Japan for ten years. Needless to say we draw on all kinds of cultural traditions in our household.  Multiculturalism is alive and thriving at BCFamily.ca.  We may not look like a family you expect to see, but as a Eurasian household we are on the cutting edge of the hottest, growing trends in Canada.

As Vancouver Sun columnist Todd Douglas wrote recently, “it is becoming ever more common to see couples of mixed ethnicity holding hands, dining out or playing with their offspring in Vancouver, Toronto and Montreal. […] Authentic inter-ethnic bonding occurs when people can honestly face real social tensions, including some of those outlined here. Inter-ethnic relationships, which continue to be on the rise, may be the best way to help us cross these cultural boundaries.”

What’s your family’s story?  Do people ask you if you’re the nanny of your children?  How does your family benefit from your inter-ethnic heritage?

The Changing Face of Canadian Diversity