I love it!  Somebody searched the term “embrace the weird” and landed on BCFamily.ca

Because it just so happens that I have written about that topic.

I didn’t say as much at the time when I wrote that post; however,  I was that girl who was called “weird”.  Not only was I called “weird” but I was informed of my “well known weird status” in front of all of my peers.  Was I weird? I wouldn’t say I was hugely different than anyone else in my age group.  I was a unique individual.  I did march along to my own tune. I was a high school student who preferred to lead than be led.  I stuck to my principles.  I carved my own path.  I reaped the benefits from my so-called “weirdness”.

Recently I found a note that a friend wrote to me during a class retreat when we were in high school.  To respect that person’s privacy, I won’t quote the piece word by word or write what she said about herself.  She reported that I didn’t worry about what others thought about me.  I was an individual and didn’t appear to mind other people’s views about me. I wasn’t “one of the crowd”.

Years later I heard an interview on the CBC. The commentator said something that caught my attention.  “Because as everyone knows, teens all want to be like each other.”

“Woa. Hold on”, I thought.  “I thought it was the opposite.  I thought the goal was to be different and stand out.”  At least this is the message I had picked up from listening to my father talk about his youth in the 50s and 60s.  During the Hippy era he was under pressure to conform to the fashions and beliefs of his peer group.  “Why would I want to become a hippy?”, he replied. “I’d just end up being like everyone else.”  Before it was fashionable to wear plaid shirts, he was working that look at his school.  It turns out that these were the only shirts he could afford but he had determined that they could make a fashion statement.  And they did. 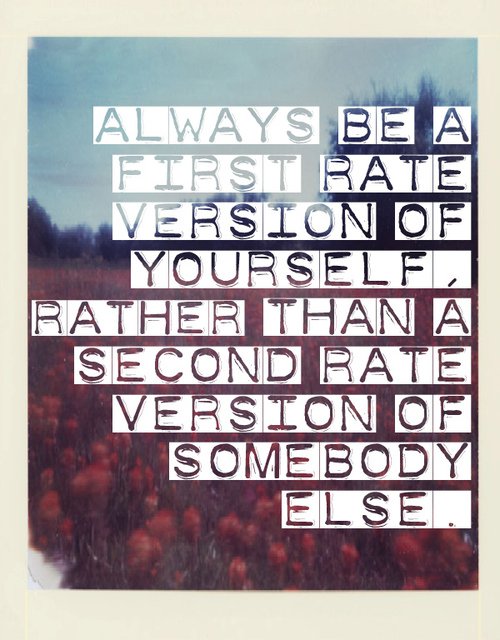 Nowadays there are so many more ways that an exchange about someone’s “weirdness” can be shared, cemented, re-shared, gossiped about and reflected upon.  I worry for the youth in my life  – that that they will suffer under the weight of all of this scrutiny in ways that I never had to endure. “Why do you worry?”, people will say to me.  “Why shouldn’t I?”, I reply.  Part of being in a community together is to have empathy for, and consider, the lot of other people – not just ourselves.

I champion the right for people to be individualistic and for their individualism to be respected – not tromped upon or scorned.  But I also equally rally around the need for adults – including parents, aunts, uncles, grandparents, friends and teachers – to continue to monitor the youth in their life carefully.  This doesn’t mean monitoring in an invasive way.  Teenagers need their private space in which they can flourish socially and emotionally.  It’s an issue of privacy awareness and thinking about priorities and what’s reasonable and appropriate.  More than an issue of privacy, it’s also about being strategic in the present, and for the future, and protecting your digital trail. Most of what went on in my head or in conversations with my friends when I was a teenager was not known by my parents.  Compared to our social media enriched world nowadays, save for what I wrote in my detailed diaries and letters to friends, those musings were not recorded in any medium.

It’s a sad irony that the Internet, which is a fantastic tool for the democratisation of education, entertainment and empowerment, can also be used as a ferocious weapon in the hands of the petty, the ignorant or the downright cruel. And sadly, there are plenty of those milling around on the Internet. (Amber Melville-Brown, Lawyer)

I often come across comments, expressed in a tone of despair, that are shared by teens on social media.  Maybe they’re just blowing off steam.

Every few months a new Next Best Thing comes on board – a space where youth can retreat behind computer screens and share their feelings, hopes, anxiety and despair with the world. I just hope that the people in their lives who can support them are aware of the challenges they face in the public forum of social media.

We can embrace our individuality – even self identify as being weird – but I know from personal experience that it’s never easy to have these types of labels dropped on us by others.  If you nurture your own unique voice, you will find the most happiness in life.  Now, more than ever, we need to help to protect youth so that they have a safe space within which they can fine tune their personal style and vision.

#LightWebDarkWeb* by Raffi Cavoukian – a book on the need to reform social media, especially for young users.